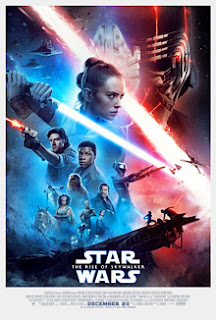 Star Wars has been and always will be a movie franchise at its core.  There may now be Star Wars books and theme parks and tv shows, but it’s the movies that always have been the ones that have brought people into this world.  In that context, the franchise has been in a somewhat precarious position for the past few years.  After a strong one-two punch of The Force Awakens and Rogue One to start the Disney era, The Last Jedi left the fandom as divided as the remnants of the Resistance and Solo was a movie devoid of any spark or originality (not to mention a failure at the box office).  So Star Wars: The Rise of Skywalker has entered into the scene with a lot riding on it.  On its own merits The Rise of Skywalker is a fun mess.  It’s a movie that knows its characters and how to develop them in engaging fashion.  However, it’s also a movie that’s trying to do too much.  It’s a movie with an end goal in mind but goes back to its bag of old tricks in order to get there.  That mostly works until its entertaining but convoluted finale.

In the context of the Star Wars series as a whole, The Rise of Skywalker is an even weirder movie and one that goes to show you that this entire sequel trilogy needed a guiding voice from beginning to end.  J.J. Abrams makes sure that The Rise of Skywalker functions as a sequel to The Force Awakens.  The Last Jedi certainly exists in the world of this movie, but J.J. spends all of his energy in this movie tying up the loose ends of the first movie in this franchise.  You can definitely feel the scars over Abrams’ and Rain Johnson’s differing storytelling styles all over this movie, especially in the first act of this movie when the plot is trying to catch you up with where these characters left off two movies ago.

All that being said, the character work in this movie is so strong that it’s hard not to have an enjoyable time throughout this movie.  This is the first movie where we really get to see the sequel trilogy main trio of Rey, Finn and Poe interact together.  That leads to some great banter in what is probably the funniest Star Wars movie ever.  The movie still finds time to give some great material to some of the original series characters.  Carrie Fisher is in this movie a lot more than I think anyone thought would be possible, Anthony Daniels gets some great interplay with Oscar Isaac and Mark Hamill was clearly having a blast filming his material for what feels like the first time since he’s returned to the role.  Even the new additions were incorporated much better than they were in The Last Jedi where they seemed to suck valuable time from some of the bigger plot lines.  Keri Russell’s introduction as black market agent Zorri Bliss is brief but she steals all of her scenes and Babu Frick and D-0 add to an already memorable gallery of non-human characters.

At the center of this movie, though, is the relationship between Rey and Kylo Ren, the main rivals in the fate of the Force.  If anything survives the battle between Abrams’ and Johnson’s dueling viewpoints it’s this relationship, and I think a lot of that is thanks to the powerful performances from Daisy Ridley and Adam Driver.  They’re certainly the best lead performances in any of the Star Wars trilogies.  The relationship ultimately comes to a head in the final act of this movie, which certainly makes up for the fact that the rest of the final act is just a remake of Return of the Jedi.

Star Wars: The Rise of Skywalker will ultimately leave the Star Wars fan base as divided as before its release, but I found it to be a fun but flawed movie that just does enough right to work as a satisfying conclusion to the Skywalker Saga if that ends up being the case.

at December 19, 2019
Email ThisBlogThis!Share to TwitterShare to FacebookShare to Pinterest
Labels: movies