There are just some films that you are going to remember forever.  They can be perfectly constructed, wonderfully unique or even completely change how you look at cinema.  After finally seeing it for a second time, I can finally confirm with a lot of thought that Boyhood is a masterpiece.  Despite its title, Boyhood is a universal film that is difficult not to fall in love with.  It could just have easily been called Parenthood or Sisterhood as the film does great justice to all of its main characters, and while the film is incredibly realistic, there is something uniquely cinematic about it.
Boyhood follows the growth of one man from boyhood to adulthood over the course of twelve years.  What makes this film unique, though, is that director Richard Linklater (who directed one of the greatest depictions of romance with the Before trilogy) actually shot the film over a course of twelve years with the same cast and crew.  It would be easy to label this monumental undertaking as a gimmick, but it’s not as Linklater finds a way to make this a film filled with interesting parts that lead to an even greater whole.
Boyhood is a perfect combination of the scrapbooking of American culture during the aughts and the life philosophizing that worked so well in the Before trilogy.  A lot of this has to do with the editing of the film, which knows just the right amount of ingredients needed to make this film really sparkle while also jumping so seamlessly through time that you won’t even notice some of the time jumps.  Whether it’s the moments of humor (which will make you smile while ringing completely true) or the tear-jerking nature of the film (do to the fact that it is so hard not to notice a little bit of your own life and struggles within these characters) every single element of this film just works.  Even the errors that arise due to the changing nature of the world during the process of making this film (including a moment where Roger Clemens is treated like a hero and another in which the future of Star Wars beyond Episode Six is deemed impossible) just add to the uniqueness of the film.
However, this film wouldn’t be anything without its incredible cast.  Patricia Arquette is the hero of the film.  She is the source of strength that this film can reliably go back to for good material, and her performance leads to a powerful final monologue that is hard to forget.  Meanwhile, Ethan Hawke makes a case for his collaboration with Richard Linklater as being one of the best in cinematic history.  He just really understands what Linklater wants out of him.  Ellar Coltrane (who slowly adapts into the perfect actor for Linklater’s writing style over the course of the film) and Lorelei Linklater (who is quite the scene stealer) also deliver great performances.  Linklater is even able to get relative nobodies from the supporting cast to deliver performances that appear to come from a seasoned veteran (especially from Marco Perella as one of Patricia Arquette’s many husbands over the years).

As great as the Before Trilogy is, Boyhood is Richard Linklater’s magnum opus.  It was twelve years in the making, but people will be talking about this film for however long film exists.
10/10
at September 24, 2014 No comments:
Email ThisBlogThis!Share to TwitterShare to FacebookShare to Pinterest
Labels: 2014 films

The Roosevelts: An Intimate History Review 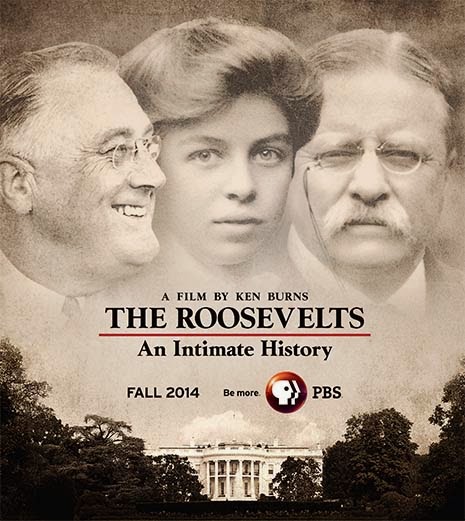 Last week Ken Burns debuted his latest documentary series as The Roosevelts: An Intimate History aired over seven nights on PBS.  At almost fourteen hours in length this is a gargantuan series, and while Burns is known to make long projects this is his longest since 2007’s The War.  To be honest, most of Ken Burns’ works need some editing down, but never have I felt the strain in one of his works as I do with The Roosevelts: An Intimate History.  While there are still many informative tidbits to be had from this project, most of it feels overlong, overdone, and ultimately a bit of a retread.

The Roosevelts: An Intimate History begins quite effectively as we are introduced to the first in its Roosevelt triumvirate, Theodore Roosevelt.  What this miniseries makes clear is that he is one of the most fascinating figures in American history, and whenever he is the focus The Roosevelts can be very lively.  It is also helpful that the series got some great voice work out of Paul Giamatti to inhabit the role of Teddy.

Unfortunately, it almost seems like Teddy is made into a side character in his own miniseries as Franklin D. Roosevelt is almost immediately introduced as well in the first episode.  That would have been okay if the FDR segments were handled as well as the Theodore Roosevelt segments.  Instead, they are just regurgitation of commonly known facts or a retread of things that Ken Burns has already covered (World War II in The War, and the Great Depression in The Dust Bowl).

However, the most poorly done character in the miniseries is Eleanor Roosevelt.  She is set up as an important figure in both Theodore and Franklin’s life and yet finds herself constantly being given the backseat in this miniseries.  It also doesn’t help that it is clear that Meryl Streep is Acting with a capital A even if you can only hear her.  The Roosevelts might actually be at its best in the last hour of the program when it’s almost exclusively about Eleanor.  It really makes you wonder what this miniseries could have been if it gave Eleanor some more focus.

The Roosevelts: An Intimate History is a lesser work of Ken Burns, but with some great voice work (once again Peter Coyote is the unsung hero of the production) and some segments that are truly interesting the miniseries prevents itself from being a complete bore.

7/10
at September 22, 2014 No comments:
Email ThisBlogThis!Share to TwitterShare to FacebookShare to Pinterest
Labels: 2014 tv

Tom Hardy has had a very interesting career so far.  For years he showed up as a supporting player in large ensembles (such as Daniel Craig’s breakout film, Layer Cake).  However, a critically acclaimed performance in the little seen Bronson allowed him to get roles in Tinker Tailor Soldier Spy, Warrior, The Dark Knight Rises and Lawless, all of which have revealed him to be an actor of some talent.  Unfortunately, we have since been forced to wait almost two years for the release of Hardy’s next film (due to filmmaking and studio issues on almost all of his upcoming films).  Well, the wait was well worth it as, in Locke, Tom Hardy delivers the performance of his career.
Locke follows Tom Hardy’s Ivan Locke as he is traveling to an unknown destination despite having multiple problems to deal with en route.  The film takes place entirely in a car with only Tom Hardy ever being shown on screen.  While this format is ultimately a gimmick, director and writer Steven Knight (the screenwriter of Eastern Promises) makes sure that it is executed perfectly and is used to fantastic effect.  This film really shouldn’t work at all, but in Knight and Hardy’s hands it is one of the most intense experiences you will have with a film this year despite no ones lives being in mortal danger.
Even with this clearly being a director/actor film there are still moments where Knight’s screenplay is able to shine through.  The film can be quite Shakespearean at times with grandiose monologues and depictions of how one generation can affect the next one.  All of this allows Tom Hardy to be able to act in a loud and big manner (which he is quite effective at doing) while still being able to add in some subtleties that make the performance all the greater.
My only complaint is that, like many recent films that have time being a major factor of the plot, you never get a sense of the time passing in this film.  At times it seems like the film is supposed to take place in real time.  Yet others it seems like we skipped ten or twenty minutes in Locke’s life.  This seems quite minor but it can be off-putting for a second or two, and that makes a difference in a film that is otherwise perfect.

Locke is a well-crafted thriller that gives a big showcase for rising star Tom Hardy.
9/10
at September 19, 2014 No comments:
Email ThisBlogThis!Share to TwitterShare to FacebookShare to Pinterest
Labels: 2014 films

With the start of the NFL season coming this week I thought I would welcome it in with a viewing of Draft Day, the Ivan Reitman-directed film that was released this past spring to coincide with the actual draft.  In many ways Draft Day feels like the football equivalent of Moneyball.  It has a fast-talking script and a solid set of performances that lead to a film that can bring the more complicated parts of a certain sport to a wider audience.  Draft Day may have more faults and less moments of greatness than Moneyball, but it’s still a solid film nonetheless.
Draft Day follows Kevin Costner as the general manager of the Cleveland Browns as he tries to orchestrate a strong draft for his team during the day of the draft.  His hectic day has him crossing paths with many people, and Draft Day does a good job of assembling a cast while also giving a large majority of its cast a moment to shine.  Chadwick Boseman is one of the clear highlights as a linebacker that is being stereotyped as a loose-cannon as he demonstrates that he can still be the center of attention in a much smaller role compared to some of his more recent work.  It also helps that the film has a strong anchor with Kevin Costner, whose Sonny Weaver Jr. is portrayed as a heavily flawed man that is in way over his head.
The fact that the script is able to make such a flawed character likeable reveals that it is another one of the strongpoints of this film.  It’s talky, energetic and filled with one-liners.  Also, Ivan Reitman knows just what to do with such a script as he employs a flashy style that doesn’t distract but instead helps keep the film flowing at a quick pace.
That being said this film is not without its faults.  Draft Day tries to be realistic as it finds every opportunity to mention real NFL events and players.  Yet the plot of the film plays out in a manner that would never happen in the NFL, which wouldn’t be so bad if the film didn’t have to maintain that it was in the real life NFL universe.  Additionally, Jennifer Garner does her best but her character’s secondary storyline is so ridiculous and superfluous that the scenes centering on this plotline are like nails on a chalkboard.

Draft Day is a fun attempt at making one of sports’ most ridiculous events relatable.
8/10
at September 03, 2014 No comments:
Email ThisBlogThis!Share to TwitterShare to FacebookShare to Pinterest
Labels: 2014 films
Newer Posts Older Posts Home
Subscribe to: Posts (Atom)