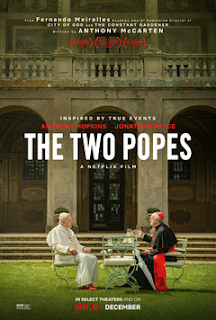 One of the more surprising things to come out of this decade in cinema is the large amount of religious movies that have been released.  These religious movies have normally gone one of two ways.  The first type is the personal journey with religion that usually comes with an auteur director such as Life of Pi, The Tree of Life and Silence.  These movies have ended up being some of the best of the decade mostly due to a deft hand behind the camera not allowing the religious overtones to hit you over the head.  The second type is the crowd pleaser.  The type of movie that gives religious audiences the content they want at the expense of any creative vision.  Sadly, in recent years the later has been the type of religious movie that has become more prevalent.  Netflix’s latest movie, The Two Popes, tries to skate in between these two styles, which ultimately dooms itself.  The movie is a mess that has interesting ideas but conveys them in boring and ridiculous fashion.

The Two Popes is the story of Pope Benedict (played by Anthony Hopkins) and Pope Francis’ (Jonathan Pryce) rises to power and the meeting between the two that ultimately ensures a successful transfer of power and a close friendship.  This movie mostly realizes it has a couple of great performers at the center of its story and tries to put the weight of the story on these shoulders.  However, large portions of this movie is just Anthony Hopkins and Jonathan Pryce narrating over flashback sequences.  It makes for a very dull way of portraying this story as it’s ultimately a lot of telling instead of showing, which goes against the very purpose of cinema.

The movie doesn’t beat you over the head with its religious overtones, but both of the main characters are portrayed so saintly that any real conflict has trouble bubbling to the surface even though the real life story that this is based on has tons of conflict that could have been molded into an interesting story.  This movie tries to be a crowd pleaser so much that it ends up being just plain boring.

All that being said Hopkins and Pryce make for an entertaining main duo.  Hopkins finds a way to do his entertaining yet over-the-top schtick for a character that isn’t all that interesting.  His energy is a delightful contribution to the movie.  Pryce, on the other hand, comes off as miscast at first (there’s a few early scenes where he is clearly being dubbed to give him a more realistic Argentinian-Spanish accent), but he is tasked with handing the more emotional scenes of the movie and does so with aplomb.

The Two Popes buries all of its potential in an attempt to please everyone.

at December 23, 2019
Email ThisBlogThis!Share to TwitterShare to FacebookShare to Pinterest
Labels: movies