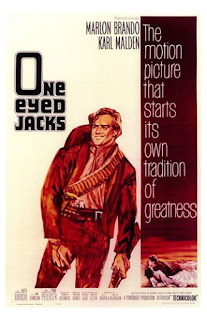 This Sunday I was fortunate enough to attend the New York Film Festival and see a restoration of Marlon Brando’s lone directorial effort, One-Eyed Jacks.  Big names such as Martin Scorsese and Steven Spielberg worked on the restoration process, which Scorsese explained in full and rambling detail in an introduction to the film, so I was interested in finding out what attracted them to spending so much time and effort on a somewhat unheralded film such as this.  One-Eyed Jacks is certainly a film worth watching, and very much comes across as a predecessor to Unforgiven.  While the film begins as a typical western it quickly becomes a very subversive genre film that you can’t tell where it will be going next.
One-Eyed Jacks follows a robber known as Rio (Marlon Brando) as he tries o track down his partner (Karl Malden) who left him for dead.  Obviously this seems like a simple and stereotypical western based off of the basic plotline.  However, this film has a sense of awareness that is ahead of its time (the film was released in 1961).  The film is constantly going left when you expect it to right.  Whether it’s a character abandoning his quest for revenge, female characters driving the plot or the film deciding to create a villain in the third act of the film, this film was using plot techniques that we wouldn’t actually see become common until decades later.  Additionally, this film has a unique sense of comedy for a western.  Brando’s Rio has a set of reoccurring jokes (and we are also introduced to the man while oddly lounging and eating a banana in the middle of a bank robbery he is perpetrating) that are quite notable for an archetype that is usually driven by his seriousness.
While the ambition of Brando’s use of comedy in this film is something to be admired it also reveals he was not as strong of a director as he was an actor.  The comedy works in a theater where you can feed off the energy of a crowd, but I can’t see many of the jokes landing while watching this film alone.  Additionally, the comedy is just more added time to an already lengthy film.  Brando tries to do a lot in this film, and his work certainly feels like a man just learning how to direct.  The runtime and pacing of this film certainly suffers because of that.
That’s not to say Brando’s directorial work was bad here.  The visuals are stunning in this film and Brando finds some interesting ways to bring certain sequences to the screen (a sequence involving Mexican authorities setting up a trap in the middle of a sandstorm comes to mind immediately).  He also gets some fantastic performances out of himself and his cast.  Karl Malden deserves special credit as he delivers one of the more memorable villains I have ever seen in a film.  The lengths that Malden’s character goes to obscuring his lies are incredible and Malden gets to do just about everything (he gets an action sequence, he gets a monologue, he gets to act drunk, he gets to dance) over the course of the film.

The last restoration I saw at the New York Film Festival was a few years back when they did Richard III (which also happened to be introduced by Martin Scorsese), and One-Eyed Jacks is easily the more memorable of the two.  This film also goes to show that the good stuff in any film festival isn’t just reserved for the main slate and premieres sections.
8/10
at October 11, 2016 No comments:
Email ThisBlogThis!Share to TwitterShare to FacebookShare to Pinterest
Newer Posts Older Posts Home
Subscribe to: Posts (Atom)