After an acting career filled with disappointments and terrible choices, Ben Affleck has started off his directing career by going two for two.  Both Gone Baby Gone (which I have not seen) and The Town (a mediocre thriller raised to the next level by a talented cast) have received major critical notices and the latter was even a box office hit.  However, Affleck’s latest directorial gig, Argo, has received the best notices of his career yet.  That is deservedly so as Argo is an intense and extremely well directed thriller that has one of the most loaded casts in recent memory.
Argo follows the real life CIA undercover mission to get six Americans who escaped from the Tehran embassy during the Iranian Hostage Crisis out of Iran.  Ben Affleck directs the film based on a screenplay by Chris Terrio (whose most prominent work to date is some work on the Glenn Close series Damages).
Ben Affleck finally proves with this film that he is the real deal as a director.  His work is just stunning and you can see it take a hold of you almost immediately.  The first scene of the film (a long sequence of the Iranians storming the US Embassy in Iran) is nail-bitingly-intense and is masterfully constructed.  While the film never really reaches the height of the opening sequence again, it consistently gets close to that creative quality.  It is a testament to Affleck’s direction that the audience is glued to almost every aspect about this film despite most people having the knowledge of how the story ends.  While Chris Terrio’s script is nothing special (this is clearly a director’s film), it does a really good job of balancing a lot of characters and giving most of them at least one moment in the spotlight.
In terms of the cast, most will be talking about the four bigger roles in the film (those of Ben Affleck as CIA extractor Tony Mendez, Bryan Cranston as Tony’s boss, Alan Arkin as a Hollywood producer, and John Goodman as makeup artist John Chambers) but the amount of great performances go well beyond that.  The already mentioned Cranston is best in show and really gets something to chew on in the intense third act.  Affleck delivers one of the better performances of the year as the idealistic Mendez and Arkin and Goodman have great chemistry together as the source of most of the humor in the film.  However, Tate Donovan and an almost unrecognizable Kerry Bishe are also great as two of the six American escapees.  Other great actors that show up during the course of the film include the ubiquitous Chris Messina, Kyle “Coach” Chandler, Zeljko Ivanek and Victor Garber.
While Argo never really reaches beyond trying to tell a true story of American success, it makes up for its lack of ambition by being almost perfectly constructed.  This is a film that is both a crowd-pleaser and a film that will keep cinephiles happy.  In other words, watch out because this film will come up a lot during the awards season.
9/10
at October 19, 2012 No comments:
Email ThisBlogThis!Share to TwitterShare to FacebookShare to Pinterest
Labels: 2012 films 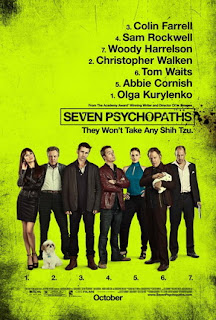 With In Bruges, Martin McDonagh had one of the greatest feature film directorial debuts ever.  With such an achievement, a follow-up to that film would have to be really good to live up to expectations.  Four years after In Bruges, McDonagh finally has released his follow-up film, Seven Psychopaths, and it does not disappoint.  While it isn’t as neat or as emotionally resonant as In Bruges, Seven Psychopaths makes up for its shortcomings with its immense energy and ambition.
Seven Psychopaths follows Marty (an unusually subdued Colin Farrell), a writer’s block riddled screenwriter, as he tries to write his latest script “Seven Psychopaths”.  However, when Marty’s eager to help best friend (Sam Rockwell) steals a crazed gangster’s (Woody Harrelson) Shih Tzu, Marty’s script becomes a little too real.
Martin McDonagh proved that he has immense screenwriting skills with In Bruges so to say that this film is a well-written film is a bit of a no-brainer.  The dialogue is snappy and original, and while the characters are not as well rounded as some will like, McDonagh does write some memorable ones.  However, what is surprising about McDonagh’s work on this film is that his directing skills have increased exponentially.  McDonagh wasn’t bad in the director’s chair for In Bruges.  It’s just that he let the script run that film.  In this film, however, there is a clear visual style and an immense amount of energy coming from the visuals and how McDonagh handles the actors.  McDonagh also does a fantastic job of adapting the ambitious and meta nature of his script to the screen.
While McDonagh’s work is very strong for the most part, the film does take a while to get going.  This is probably a result of McDonagh trying to maneuver too many pieces in the early goings of the film, but that all pays off in a hilarious and absolutely insane second-half.  Yet despite all of that, McDonagh still finds a way to find a touching place to end the film on (not including the mid-closing credits scene).
While this is arguably Martin McDonagh’s film, it would not have been as good as it is if it weren’t for three fantastic, go-for-broke performances.  Christopher Walken is always good for at least a decent performance, but here he perfectly applies his mastery of deadpan line reading as a religious dog-kidnapper.  This is in contrast to Woody Harrelson’s over-the-top (but suitably so) performance.  Harrelson is well casted as an insane hitman and he handles it so well that it feels odd imagining anyone else in the role (despite the fact that Mickey Rourke originally was going to play the role).  However, the performance that steals the film belongs to Sam Rockwell.  Rockwell has a history of stealing films and receiving little credit for it from mainstreams audience and this film continues that.  Rockwell is given an extremely energetic and bombastic performance but in the hands of Rockwell it is entertaining instead of annoying.  He also delivers one of the best scenes of the year with a long monologue that includes his own sound effects at a camp-side fire.  While Colin Farrell is the lead in this film, all he is tasked with doing is being a point of normalcy that the audience can look back to in the middle of all of the craziness.  He does that gracefully.
Ambitious, well acted and genuinely funny, Seven Psychopaths is one of the best films of the year.
9/10
at October 17, 2012 3 comments:
Email ThisBlogThis!Share to TwitterShare to FacebookShare to Pinterest
Labels: 2012 films 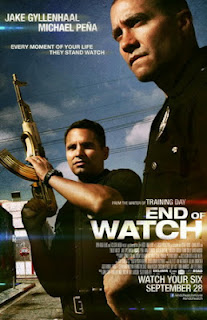 It’s getting to the point nowadays that any film using the “found footage”/fake documentary concept becomes instantly irritating.  It may have worked with films like Cloverfield but many films just don’t need the concept.  Films like the Paranormal Activity series use the concept for the basis of the film instead of an actual story.  While films like District 9just abandon the concept mid-film and make it look like the concept was used just for the appearance of originality.  End of Watch, the new buddy-cop film starring Jake Gyllenhaal and Michael Pena, suffers the same fate as the latter.  Luckily, it is saved by a cast that tries its hardest to be as realistic as possible.
End of Watch follows a pair of cops (Gyllenhaal and Pena) as they go through a breakthrough of successful arrests.  However, as the duo make bigger names for themselves, their names also go up on the hit list for a cartel that has emerged in the Los Angeles area.  The film is directed and written by David Ayer (writer of Training Day).  While David Ayer’s writing is top-notch in this film (although some of the dialogue easily could have been improvised on the set and wasn’t actually a part of his script), Ayer’s direction of this film leaves a lot to be desired.  He makes a half-hearted attempt to turn this film into a fake documentary (or found footage film or whatever you want to call it).  While it works originally, Ayer quickly abandons it and the transition is not smooth.  What results is a bunch of shots of a character holding a camera that is filming the action.  Yet there is no added perspective from just simply using the footage from the camera that the character was shooting with.  The entire style almost ruins what is a realistic and very touching portrayal of friendship.  This could have been a much better film if it was just a simple crime drama in a regular format.  It is a shame that Ayer didn’t have enough confidence in himself to do so.
Luckily, the cast is stellar in this film.  Jake Gyllenhaal and Michael Pena have perfect chemistry and completely carry the film.  It is difficult to choose who gave the better performance because both performances are so dependent on the other.  That is the definition of great chemistry.  Anna Kendrick is given a thankless role as the girlfriend of Gyllenhaal’s character but she is typically charming in it.  David Harbour and Natalie Martinez also leave an impression in short roles as a seasoned cop and the wife of Pena’s character respectively.  It was also great to see Frank Grillo in another role this year (after his breakthrough performance in The Grey) as the police sergeant.
The cast brings their all to End of Watch, and this easily could have been a great film if David Ayer left this film to his performances.  Unfortunately, he didn’t think they were enough and added a lazy attempt at a fake documentary film.
7/10
at October 06, 2012 No comments:
Email ThisBlogThis!Share to TwitterShare to FacebookShare to Pinterest
Labels: 2012 films
Newer Posts Older Posts Home
Subscribe to: Posts (Atom)