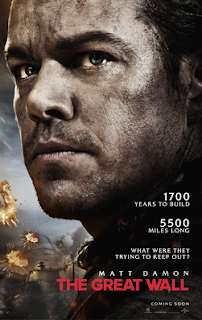 From casting controversies to disappointing box office results, The Great Wall (the latest film from Chinese auteur Zhang Yimou) has received a lot of negative attention from almost the moment that it was announced.  While the end product is not a good film, The Great Wall is not without merit and that is getting lost amid all of the negative publicity.  There is a lot of artistry put into the costumes and some aspects of the world building of this fantastical version of old China.  The film also has a surprisingly strong set of performances despite the controversy surrounding Matt Damon’s casting.  Yet all of this does not make up for the fact that this film puts no effort into building a story.  It’s a set of visuals with no meat to it.
The Great Wall follows a group of traders as they search for black powder in eleventh century China.  After most are killed off by bandits and a mysterious attack by a monster with a green arm, William (Matt Damon) and Tovar (Pedro Pascal) find themselves at the Great Wall where they are taken prisoner by a splinter group of the Chinese army known as the Nameless Order.  They soon learn that the Nameless Order is tasked with stopping an apocalyptic attack by alien lizards known as the Tao Tie.  For such a weird story there is not a lot of effort building this fantastical world in the narrative sense.  Nothing during the course of this movie makes sense and what makes matters worse is that the motives of characters make even less sense than some of the plot elements.  It’s a mess of a script and a mess of a story that leaves little for the film to build on.
Fortunately, the other elements of the film try really hard to make something out of this film.  Despite some shoddy CGI effects, the visuals tend to be really impressive.  The battle armor and weapons are some of the most detailed creations ever put onscreen, and there are some sequences that are allowed to dazzle under the direction of Zhang Yimou.
It also helps that the film gets a strong set of performances from its cast.  Matt Damon is a sturdy lead that is able to remain interesting despite a script that really lets his character done.  Some of the lines he is forced to say could have been really embarrassing, but with his charisma he is able to avoid any downfalls.  Jian Tian is the real star of the film though.  Her performance in this film has all of the signs of a breakout performance, and it’s hard not to take your eyes off the screen when she gets to be the center of attention.  It also seems like Willem Dafoe and Pedro Pascal (it’s weird putting him on the same level as Dafoe but so far all he has done is proven that he’s the real deal) are incapable of giving a bad performance.

There’s a lot going for The Great Wall, but none of that makes up for the fact that no effort was put into the story its attempting to tell.
5/10
at March 05, 2017 No comments:
Email ThisBlogThis!Share to TwitterShare to FacebookShare to Pinterest
Labels: 2017 films