If you ever want to get into hiking there is no greater app that I could recommend than AllTrails. Due to a large user base, AllTrails has one of the most extensive sets of trail maps of any hiking app, and if you join the subscription tier of the app you can download these maps to your phone so you can still track where you are without cell service. Another feature of the app is that it generates rankings from user reviews and ratings so if you want to see some of the “best” trails of any given state it is possible to do so. Living in Connecticut I thought it would be an interesting idea to see just how well the top 10 highest ranked trails in Connecticut compare to my personal preferences for hiking the state for years now.

AllTrails’ rankings start off quite well with the Mount Frissell and Brace Mountain Loop Trail at number ten. Personally, I find Connecticut to be a tough state to find good hiking spots unless you really look. Most of the best hiking is centered in the northwest corner (for intense and more rustic hiking) and the coast (for relaxing but sight filled strolls). The Mount Frissell and Brace Mountain Loop Trail is partially located in the former. The trail actually winds its way through three different mountain tops in three different states, which gives it a sense of uniqueness. You begin on the Connecticut/Massachusetts border and head towards Round Mountain, one of Connecticut’s highest peaks, before ascending further to Massachusetts’ Mount Frissell. As you descend a little bit further from the summit of Mount Frissell you will actually once again cross the Connecticut border and reach the actual highest point in Connecticut at 2,379 feet (despite Bear Mountain just a couple of miles away trying to claim that honor for itself with a plaque with false information on it). As you complete the descent from Mount Frissell you will reach a marker for the triple state point where Connecticut, Massachusetts and New York meet. Continue on and you will reach Brace Mountain in New York before meandering back into Connecticut to complete the loop. There’s a lot going on for this hike despite being a modest 5 miles in length. The semi-alpine environment you get on some of the tops of these mountains is also quite picturesque so it’s hard not to enjoy this hike despite it being only partially located in Connecticut.

Ranked at number nine is Roxbury Mines. If you’re looking for a workout, this hike won’t do much for you. It’s a pretty level hike that doesn’t get picturesque until you get to some farmland on the banks of the Shepaug River. That being said, the journey around the mines is quite interesting and being able to look into some of the historical structures is a fun experience.

At number eight is Sleeping Giant Tower Trail, which I think is a case of a trail's ratings being inflated due to its close proximity to a major city and the fact that it's right across the street from a college campus. The trail is a slightly over 3 mile out and back that takes you up a gravel road to a lookout tower. The tower offers a view of New Haven and there’s some interesting cliffs next to the tower, but otherwise a lot of other hikes in the state have a lot more to offer. The gravel trail also makes this seem really pedestrian.

Ranked at number seven is the Talcott Mountain Trail. At 2.5 miles it’s a rather short hike but the trail does have some decent elevation gain and there’s numerous viewpoints of the Farmington River Valley throughout the hike. The hike to Heublein Tower at the top of this trail used to be an annual pilgrimage for my family so there is a sense of nostalgia for me that makes its placement on this list worthy in my opinion. While not part of the trail, King Phillip’s Cave is a slight detour that is well worth your time.

Coming in at number six is the Bluff Point State Park and Coastal Reserve Trail. Connecticut being a state on the ocean you have to expect at least one oceanside trail on this list and this trail is honestly some of the best seaside property in the state. I could do without the commotion from the nearby airport, but this trail offers numerous views of the ocean before turning into a nearby forest. There are ample opportunities to go bird watching, and there are even a few areas where you can put down a beach chair and just relax. At 3.6 miles on an almost completely flat track, this once again won’t get your blood pumping, but it is a relaxing stroll.

Ranked at number five is the Wadsworth Falls Trail, which belongs nowhere near this list. There are numerous other waterfalls that are just as scenic or even more so in the state, and the trail itself doesn’t even lead to the main falls but to a smaller offshoot of the waterfall. Despite this, the trail has a reputation of showcasing a large, scenic and easily accessible waterfall so it’s extremely crowded even on the somewhat rainy day that I went on. It’s honestly perplexing how this made the list.

Coming in at number four and three respectively are the Mirror Lake, Castle Craig, Merimere Reservoir Loop and the Chauncey Peak Trail. I’ve decided to talk about them at the same time as they are both quite similar. They both loop around a reservoir where on one side you walk alongside the reservoir and on the other you ascend up a rocky hill that eventually overlooks the reservoir. The big difference between the two is that the Chauncey Peak Trail belongs nowhere near this list as the views are blighted by an active mine on one side and an urban area on the other while the Mirror Lake, Castle Craig, Merimere Reservoir Loop begins in a crowded park but eventually ascends to a castle that you can enter into and a more picturesque body of water where birdlife and other animals are actually present. The one problem with the latter is that the castle has a road leading right to it so the experience of hiking up to it is ruined by hordes of people who just drove to it (Sorry, but I hate drive-up summits!).

At number two is the Ragged Mountain Blue and Red Blazed Loop, which is a pretty solid example of Connecticut having some good hikes in an otherwise looked down upon state park system. At 5.6 miles in length and some elevation gain this feels like a more substantial hike than a lot of the other entries on the list. It has expansive views of the nearby lakes and ponds and has some areas alongside cliffs that will raise your heartbeat a bit (It’s a frequented spot for rock climbing). This is a quite popular trail so you won’t find solitude here and you will need to come early or late due to the lack of parking.

Despite being a rather disappointing list, AllTrails absolutely nails the best hike in Connecticut with its choice of the Bear Mountain Trail. Bear Mountain is located in the northwest corner of the state in Salisbury, CT. At 6.1 miles and 1683 feet of elevation gain this feels like an actual hike. It’s also the highest peak in Connecticut (despite the marker at the summit incorrectly claiming it’s the highest point in the state). The trail follows the Undermountain trail to the famed Appalachian Trail before looping back around after the summit of Bear Mountain on another blue trail. The top section features a really nice and somewhat long section of semi-alpine environment that allows for expansive views of the area as well as the best place to catch a sunrise in the state. While there is a lot of elevation gain, it’s well spread out so the hike never seems strenuous. All in all, it’s one of the best hikes I have ever done. 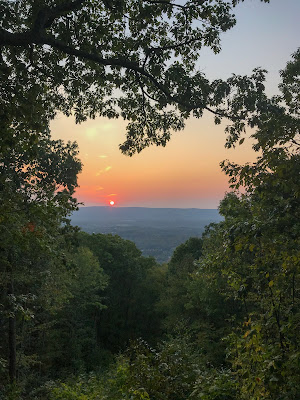