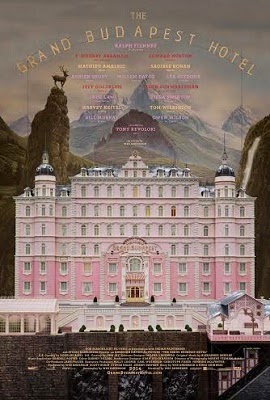 Wes Anderson has always been known for his whimsical storytelling style and his colorful visual style.  With such a unique style Anderson really stands out from the rest of the directors currently working today, and due to this his films can be a breath of fresh air.  Yet Anderson can also get a little too whimsical and a little too colorful with his films at times resulting in a mess.  The Grand Budapest Hotel is one of those messes.  There is a lot to like in The Grand Budapest Hotel (especially its large and talented cast), but much of it is undone by a boring plotline that is ignored in favor of a bunch of jokes and gags.
The Grand Budapest Hotel follows the telling of a long told tale about a lobby boy (Tony Revolori) who becomes the protégé of Gustave H. (Ralph Fiennes) of the world famous Grand Budapest Hotel.  When Gustave H. gets caught up in a murder conspiracy, the two must uncover the mystery to clear Gustave H.’s name.  The film is directed by Wes Anderson (The Royal Tenenbaums and Fantastic Mr. Fox) and is written by Anderson with help from Hugo Guinness (a frequent collaborator with Anderson).
There are a bunch of solid laughs in this film.  In fact, The Grand Budapest Hotel might be Wes Anderson’s funniest film yet.  Unfortunately, this also becomes the film’s biggest problem as it becomes clear that more attention was paid to the gags than to the plot.  That can work with some films, but The Grand Budapest Hotel’s plot needs attention and clarity.  It’s a comedy at heart but due to its plot it’s also a thriller.  This combination definitely doesn’t work and especially so when the thriller components are given so little attention despite being integral to the film.  Luckily this massive problem doesn’t get in the way of Wes Anderson’s typically interesting visual style.  This might be Anderson’s biggest film yet in terms of scale and that allows for some stunning sequences.
The film also lucks out in that it gets two strong performances from its two leads and has an amazing supporting cast to back them up.  It could have been a huge mistake to have the typically serious Ralph Fiennes play as comedic of a character as Gustave H., but he puts that theory to rest rather quickly with one of his best performances in a while.  Gustave H. might be Wes Anderson’s funniest character to date and most of that has to do with Fiennes’ charming performance.  More surprising, though, is that newcomer Tony Revolori more than holds his own despite being constantly onscreen with Fiennes.  Revolori has the incredible ability to play off of with consistently great results that it seems like he is an actor much more experienced than he actually is.  The supporting cast is filled with recognizable actors doing great work including Willem Dafoe as a deadly efficient henchman, Jeff Goldblum as a lawyer in over his head and Jude Law as a man recounting a story to name a few.
A great cast and some strong direction is almost enough to save The Grand Budapest Hotel from a storyline that isn’t given enough attention.
6/10
at March 24, 2014 No comments:
Email ThisBlogThis!Share to TwitterShare to FacebookShare to Pinterest
Labels: 2014 films