The Conjuring has received a lot of advance buzz leading up to its premiere this past Friday.  Insiders and critics who have seen it in advance have been saying it is great and fully delivers on the chills while an R-rating has been rumored to be given to the film just for how damn right scary it is.  While The Conjuring is far from the scariest movie ever, there is a lot to admire about it.  It’s a well-constructed film that relies on its love for its subject matter rather than cheap jump scares (there are a couple but they are kept to a minimum).  However, what really makes The Conjuring a step above its horror brethren is that it’s a master class in how to set up a film franchise.  It concludes its stories and arcs while also leaving enough open to intrigue audiences further.
The Conjuring follows Ed and Lorraine Warren (Patrick Wilson and Vera Farmiga respectively), the real life paranormal investigators, as they are asked by a worried family to investigate their house for a possible demonic possession.  Although Ed is becoming weary of the toll the investigations are taking on Lorraine, they agree to do the investigation at which point they are caught up in one of the most perilous investigations of their life.  The film is directed by James Wan (Saw and Insidious) and is written by Chad Hayes and Carey Hayes (who have worked on nothing bigger than the House of Wax remake).
Considering he was working on three different films at once (this film, Insidious: Chapter 2 and Fast & Furious 7) you would think James Wan wouldn’t be able to put all of his effort into this film.  Yet the greatest part about this film might be its direction.  This easily the classiest horror film in a long time.  Wan brings a style to the film that is charming as it embraces its old school roots.  It was refreshing to see makeup and practical effects are at the forefront of this film.  More importantly though is that when he went for more current horror film tropes he used them effectively (the tracking shots were done effectively when they are often done so haphazardly in present day films of the genre), and even when they weren’t (the one or two jump scares) they were immediately followed by a genuinely horrific moment.
Oddly, the writing for the film is almost as good.  While there may be too many characters in the film to handle, Chad and Carey Hayes really hone in on the Warrens and build a mythology for them that feels organic while also providing a wealth of material that could last multiple films.  While the arcs of all of these characters are finished there are enough tidbits left around that will still have audiences intrigued.
The acting for the adult characters is really strong all around.  Vera Farmiga and Patrick Wilson work up a great chemistry with each other and never look silly in moments that it would have been easy to do so.  Ron Livingston (and especially) Lili Taylor are also quite good as the inhabitants of a haunted house.  The only weak spot are the actresses playing the daughters of Livingston and Taylor’s characters, and that has a lot more to do with the writing for those characters than the acting.
The Conjuring is one of the best horror films in a long time and will have you anticipating another go-around with these characters.
8/10
at July 21, 2013 1 comment:
Email ThisBlogThis!Share to TwitterShare to FacebookShare to Pinterest
Labels: 2013 films

Just three years ago, following the release of Toy Story 3, Pixar was considered an immaculate filmmaking machine as well as the best studio in the world.  Then came Cars 2, which turned out to be the studio’s first film with a majority of negative reviews.  Then came Brave.  While the film was quite a strong effort, the film received a large backlash due to it being too much like a Disney princess movie (does it matter what type of movie it is if it’s good?) and whether or not it handled its feminist character correctly (a bogus controversy).  So that left it to Monsters University to truly turn the ship around for Pixar.  That was a little concerning to me as I thought the first film was one of Pixar’s worse efforts and there aren’t many good prequels out there.  However, Monsters University turns out to be a decent film that uses its prequel roots better than most films would.  Despite it being very lightweight there is a lot to like.
Monsters University follows Mike Wazowski (voiced by Billy Crystal) as he grows up dreaming of attending Monsters University and becoming a scarer.  When he finally gets to Monsters University, however, he finds himself getting into trouble with Sulley (voiced by John Goodman) and ultimately being kicked out of the university.  With his dream destroyed, Mike tries one last attempt at keeping his dream alive by competing in the Scare Game.  In order to win, he will have to put his differences aside with Sulley.  The film is directed by Dan Scanlon (directing his first feature length film) and is written by Scanlon, Daniel Gerson and Robert L. Baird.
The Monsters Inc. world has always been one of the harder universes created by Pixar to get into so there were a bunch of roadblocks in getting this film to be good.  While Dan Scanlon and company create a bunch of interesting characters (all voiced to perfection, which is usually the case for Pixar films) you are still left trying to find ways to get into this world.  It’s just a weird mix of a goofy world that will suddenly have its sad and tender moments.  Luckily, unlike the first film, this one finds interesting ways to get the plot to its ending.  We know how Mike and Sulley end up and yet you are left guessing until the very end about how they will get to that point.  That is the real strength of the film: it’s ability to plot a story that has an ending we already know.
Monsters University is lightweight Pixar, but it’s still an enjoyable time at the theater.
7/10
at July 20, 2013 No comments:
Email ThisBlogThis!Share to TwitterShare to FacebookShare to Pinterest
Labels: 2013 films

65th Primetime Emmy Award Nominations: The Good, The Bad and The Ugly 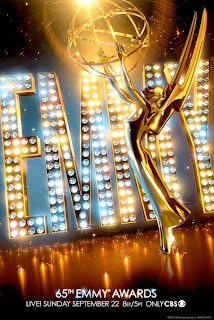 The Emmy nominations were announced this morning.  You can download all of the nominations here.  I ended up predicting 106 of the 141 nominees in the main categories for a percentage of 75.2% (which is up 6.6% from what I predicted last year) and 319 of the 528 nominees in all categories for a percentage of 60.4% (which is up 4.8% from what I predicted last year).  I also correctly predicted all of the nominees in Outstanding Comedy Series, Outstanding Miniseries or TV Movie, Outstanding Lead Actor in a Miniseries or TV Movie, Outstanding Writing for a Miniseries or TV Movie, Outstanding Hairstyling for a Single-Camera Series, Outstanding Single-Camera Picture Editing for a Comedy Series, and Outstanding Sound Mixing for a Half-Hour Series.  So without further ado let’s get into some of my thoughts on this year’s nominees.
THE GOOD
-Breaking Bad finally got a writing nomination.  One of the best-written shows in television history has waited forever to break into the category, but now it really has.  It didn’t get nominated just once, but twice in the category for “Dead Freight” and “Say My Name”.  Along with a directing nomination and four acting nominations (including one for the very deserving Jonathan Banks), Breaking Bad has to be considered one of the favorites to win Best Drama Series.
-Game of Thrones tied with American Horror Story: Asylum for most nominations for any program (17 in total).  The love for American Horror Story is ridiculous, but that’s another argument for another day.  Let’s just be happy that Game of Thrones received the amount of acclaim that its third season deserved.  It was also really nice to see Emilia Clarke and Diana Rigg join Peter Dinklage in terms of acting nominations for the show.
-30 Rock got a big farewell with 15 nominations.  30 Rock was, in my opinion, the best comedy of the 2012-2013 season so this was richly deserved.
-It was great to see that voters held no grudge towards the Netflix programs due to them not airing on television.  House of Cards scored 9 nominations including the big one, Best Drama Series.  Arrested Development received 3 nominations including one for Jason Bateman, and even Hemlock Grove got 2 nominations.
-The Hour has been cancelled for months now.  Yet it scored 2 big nominations.  Best Writing and Best Casting for a Miniseries/Movie are worthy sendoff nominations for a show that was gone too soon.
-Margo Martindale picked up another Emmy nomination.  Martindale is clearly one of the best character actresses working, and she picked up another nomination for a strong performance on The Americans.
-Ethel, the documentary about Ethel Kennedy and the RFK family, was one of the best documentaries that aired on TV during the 2012-2013 season.  It received 5 nominations.
-North America was a terrible attempt at building off of the momentum of the Planet Earth series and its spinoffs.  I was glad to see it get completely blanked.
THE BAD
-Manhunt received 2 nominations including Best Documentary/Nonfiction Special.  The documentary was a rather incomplete and disappointing look at the hunt for bin Laden.  However, what really makes me mad about these 2 nominations is that the producers and subjects within the documentary presented the documentary as something it clearly was not at the expense of other productions (mainly Zero Dark Thirty).  Yet they still were rewarded.
THE UGLY
-Corey Stoll gave one of the performances of the year and clearly stole House of Cards from names such as Kevin Spacey and Robin Wright (who were both nominated).  Yet his name was nowhere to be found among the nominees.  I guess he will just have to take a leading role in The Strain as his reward for such a fantastic performance.
-The Americans and Hannibal were not only two of the best new shows of the year but also two of the best shows of the entire year.  Yet Hannibal got completely blanked and The Americans was rewarded with only 1 other nomination besides the guest acting nomination for Margo Martindale.
at July 18, 2013 No comments:
Email ThisBlogThis!Share to TwitterShare to FacebookShare to Pinterest
Labels: 65th Primetime Emmys

Here are the 3 things that would make me happiest to see tomorrow morning:

1. Breaking Bad Gets a Writing Nomination 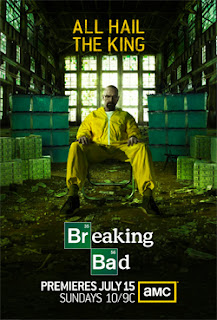 When all is said and done, Breaking Bad will probably end up as one of the best TV series of all-time.  A lot of that has to do with the fantastic writing that Vince Gilligan and company do on the show.  Yet Breaking Bad has never received a writing nomination at the Emmys.  It is time for that to change.
2. Jonathan Banks Gets a Nomination

Jonathan Banks has long been one of the more underrated actors in the Breaking Bad cast, but this year he brought his game to a whole new level with extra screentime.  Banks may have actually delivered a performance that surpassed the great Bryan Cranston during season 5.
3. Corey Stoll Gets a Nomination

Just like Jonathan Banks, Corey Stoll stole his show from a much more acclaimed actor.  In this case it was House of Cards and Kevin Spacey.  Stoll had a breakout year and got a major role on one of the most anticipated TV shows in production, The Strain.  All of that has to do with his spectacular performance as a doomed congressman.
at July 17, 2013 No comments:
Email ThisBlogThis!Share to TwitterShare to FacebookShare to Pinterest
Labels: 65th Primetime Emmys