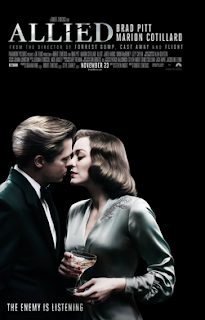 For decades now Robert Zemeckis has quietly been one of Hollywood’s most vital cinematic voices.  Whether it has been delivering blockbusters that will be remembered forever (the Back to the Future series and Forrest Gump), nurturing talent (he did not discover Peter Jackson but he certainly helped him gain an audience in Hollywood) or trying to bring new technology to the forefront (his adventures with motion capture technology have not been effective for the most part but he has helped introduce a technology that is having a massive impact on filmmaking today).  So it is slightly disappointing that his latest film, Allied, is just so conventional.  Allied is certainly not a bad film and is in fact enjoyable for most of its runtime.  However, it’s just way too easy to critique a film as lazy as this.  Whether it’s terrible use of CGI, Brad Pitt’s acting choices, or Steven Knight’s boring script there is just way too much in this film that could have been easily fixed.
Allied follows British spy, Max (Brad Pitt), as he is tasked to infiltrate a group of Nazis in Morocco in the lead up to World War II.  He works with a French resistance fighter Marianne (Marion Cotillard) to assassinate the leading members of the group.  After his task is completed he brings Marianne to London and marries her.  A year later, in the midst of World War II, British intelligence alerts Max that Marianne may in fact be a Nazi spy, and he spends the next 72 hours trying to clear Marianne’s name before British intelligence obtains clear evidence of her espionage.  As a thriller, the film works decently.  It’s just that everything else going around the central story goes wrong.
Firstly, a lot of effort is put into the costume design of this film.  The work from Joanna Johnston is quite memorable.  Unfortunately, part of that is due to the fact that they stand out amid a film that uses sets and visual effects in such poor fashion.  The sets almost always come across as stage sets as in there is not much to them beyond what is presently on the screen, and then the visual effects are too often used to display grandeur in settings, in which it would have been much more effective to shoot on location.
Secondly, screenwriter Steven Knight delivers a script that isn’t really that interesting.  The film goes through the motions from beginning to end without making any interesting points.  That’s a shame because Steven Knight is clearly a talented screenwriter.  His work on Locke is original and really impressive.   His work on the earlier seasons of Peaky Blinders also displays a great work of art that is not so different from what this film could have been.  If more emphasis was put on quality rather than quantity from Steven Knight (he had THREE films released last year while also still working on Peaky Blinders, which is soon to be paired with work on another series, Taboo) some of the mistakes in this film could have been corrected.
Finally, I don’t know what Brad Pitt is doing in this film.  Pitt is one of the best actors in the world when he wants to be (his work on The Assassination of Jesse James by the Coward Robert Ford and The Tree of Life will surely stand the test of time), but he is also very capable of overacting, which he ends up doing a lot here.  To make matters worse is the fact that he is playing a British character and yet he is speaking in his typical dialect.  This wouldn’t be so noticeable if this wasn’t such a serious film, but he ends up coming across as Tom Cruise did in Valkyrie (just without the enthusiasm of Cruise’s performance).  That’s a shame because his better half in this film, Marion Cotillard, delivers such a strong performance.  Cotillard really could have ate this film up as the ambiguous antagonist, but she delivers a much more subtle version of that type of character that makes the film much stronger for it.

Allied has many problems but thanks to a strong performance from Marion Cotillard the film can be enjoyable at times.
5/10
at December 07, 2016
Email ThisBlogThis!Share to TwitterShare to FacebookShare to Pinterest
Labels: 2016 films