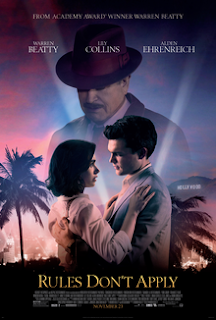 There is a reason why “old-school” filmmaking has mostly disappeared in today’s world of cinema.  Films such as Casablanca, Gone with the Wind and other films of Hollywood’s Golden Age would come across as boring and conventional in today’s climate where we have experienced decades of innovation since those films first appeared.  It will be the case with superhero films in the very near future.  As such, Warren Beatty’s first film in over a decade does come cross as too conventional.  Rules Don’t Apply strives for the type of filmmaking and storytelling that was present in the 30s and 40s.  Some of that does come across as refreshing (and that’s mostly due to a well crafted and well acted film), but a lot of it comes across as empty as non-blockbuster films nowadays have focused more on theme and other avenues that films of the 30s and 40s did not.
Rules Don’t Apply follows Frank (Alden Ehrenreich), one of Howard Hughes’ (portrayed by the director and writer of the film, Warren Beatty) personal drivers as he rises through the ranks of Hughes’ entourage and begins to fall in love with an aspiring actress (Lily Collins) who he is forbidden to have relations with.  This is ultimately a very conventional romantic drama with its one defining characteristic being its love for Hollywood.  The industry has clearly aged past Warren Beatty, and Beatty is just not able to keep up with it with his storytelling and scripting here.  There is a lot of talk in this film about sex and religion that just comes across as surface level and very dated.
That being said Beatty and this film are able to overcome this hurdle for the most part by the fact that this is very clearly a passion project of Beatty’s.  The amount of love for the material on display here does a lot in the film’s attempts to overcome its shortcomings.  The attention to detail in the production values of the film are quite noticeable (Caleb Deschanel’s cinematography is a real highlight), and you can also tell Beatty put a lot of thought into casting this film.  Alden Ehrenreich has so much charisma that he is destined to be a star and also creates something interesting out of a paper-thin character in this film.  Lily Collins seems miscast at first as the leading lady in this film but eventually displays a pretty large range in her acting ability throughout the film, and Beatty is able to finding a new way to portray figure that it seems like every filmmaker wants to cover at some point.  It was also nice to see a supporting cast of recognizable faces whether it was Martin Sheen and Ed Harris in cameos or Paul Schneider making his long awaited return to character actor work.
Rules Don’t Apply follows a very conventional storyline with a subject matter that has been covered to death, but Warren Beatty shows enough passion for the material to turn what could have been a boring catastrophe into a charming and decent time at the movie theater.
7/10
at December 07, 2016
Email ThisBlogThis!Share to TwitterShare to FacebookShare to Pinterest
Labels: 2016 films