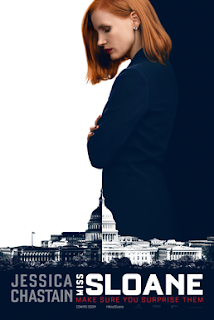 In recent years we have had an influx in entertainment about politics.  Maybe it’s because of the highly publicized nature of politics nowadays.  However, the quality of this entertainment has sometimes been almost as disappointing as the quality of American government itself.  House of Cards is the most high profile example, and the show has only rarely reached its potential.  Even the best of political entertainment in recent years (that is easily Robert Schenkkan’s LBJ play, All the Way) has come with caveats (the recent HBO adaptation struggled to find any of the spark of the play).  So it is a pleasant surprise that Miss Sloane, the film about anti-gun lobbying in Washington, is more than just a really good Jessica Chastain performance.  Miss Sloane strives to be the next The West Wing (the script SCREAMS Sorkin) and for the most part finds a way to be an effective film version of that with a darker twist.
Miss Sloane fortunately realizes from the get go that its main asset is its leading lady, Jessica Chastain.  This is the type of feisty performance that got Chastain raves and awards in Zero Dark Thirty, except here she gets to be the star instead of the lead of an ensemble film.  As such, this is Chastain’s best work since her 2011 breakthrough year.  For a time it does feel like this is a film with a lead in search of an actual story.  A lot of the early portions of the film have Chastain’s Elizabeth Sloane as such an overpowering force that it’s hard to notice anything else going on.  However, the film’s quippy script and a little focus being given to characters like Esme (Gugu Mbatha-Raw as a smart lobbyist with a secret past at the firm Elisabeth goes to in order to take down the gun industry) allow the film to expand into something more.
At times this film feels a lot like Netflix’s version of House of Cards as we witness Elizabeth destroy everyone in her path on the way to political victory.  However, this film does take the time to learn a thing or two from the original BBC version of House of Cards as it finds a dry sense of humor that helps it stay away from the boring and dry path the Netflix version does find itself occasionally on as it takes itself way too seriously.

The one weakness of this film is that it does have a runtime of over two hours, and you can feel that by the end of it.  It also doesn’t help that the last act has a twist that doesn’t really add much to the film.  It only changes the status quo on a surface level, and the buildup to the twist isn’t worth it at all.  A better final couple of sequences could have really turned this film into something great.  As it stands, Miss Sloane has to settle as being an entertaining if unsubstantial political thriller with a top-notch Jessica Chastain performance.
7.5/10
at December 19, 2016
Email ThisBlogThis!Share to TwitterShare to FacebookShare to Pinterest
Labels: 2016 films