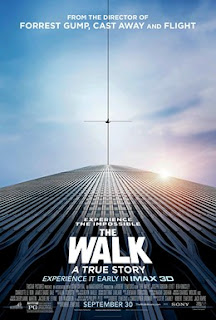 Robert Zemeckis has to have one of the most diverse careers of any director. His ability to go from one genre to the next with relative ease has made him somewhat of an underrated talent despite being an Oscar award winning filmmaker with multiple blockbusters under his belt.  With his latest film, The Walk, Zemeckis once again delivers a unique cinematic experience even if the film itself fails to live up to its own high expectations.  While The Walk is not only visually ambitious but thematically ambitious as well, it is let down by a bad lead performance and a lack of narrative direction.
The Walk follows Philippe Petit as he tries to enact his plans to walk between the Twin Towers.  While this material has already been covered in the acclaimed documentary, Man on Wire, this film definitely feels enough of its own thing to warrant its existence.  For starters, this is a film that tries to take cinematic imagery into new directions, and the narrative allows opportunities for human warmth that are just not present in the documentary.  It’s unfortunate to say that The Walk’s attempts to take advantage of this just fall flat.  Philippe Petit as portrayed by Joseph Gordon-Levitt happens to just be an annoying character rather than the warm and inspiring character he is meant to be.  Whether it’s his near suicidal actions or Gordon-Levitt’s cartoonish attempt at a French accent, it’s hard to invest in him.
Yet it is hard not to admire what Zemeckis is trying to do with this film.  Filming the entire production with 3D cameras, it’s hard not to be floored by some of the visuals, especially in the final act.  Additionally, Zemeckis’ ability to twist this tale into an exploration of what exactly is art is an engaging theme that runs throughout the film.  So even in the less than stellar opening moments of the film that flop around between boring setup and even more boring character introductions, there is still something to be invested in.
It would also be a shame to wrap this up without mentioning the stellar if minor work from James Badge Dale as one of Petit’s “accomplices”.  The man clearly deserves a major film of his own as he once again steals a film with only a minor amount of screentime.  The man just oozes charm and just finds a way to put depth into minor characters (whether it’s in The Departed, The Grey or even Zemeckis’ Flight).

The Walk is a film with visuals so powerful that it is able to overcome its many problems.
7.5/10
at October 21, 2015
Email ThisBlogThis!Share to TwitterShare to FacebookShare to Pinterest
Labels: 2015 films