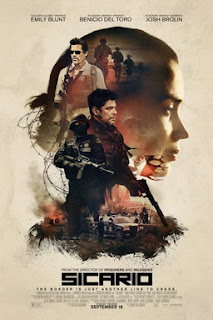 We have seen a lot of films in recent years with very anti-American viewpoints.  That’s a fine thing for cinema as it shows there are no restraints on what you can do with art in our country’s current political climate.  However, where is the line on how much anti-American material can be put into the cinematic zeitgeist.  Sometimes too much is just way too much and it’s unfortunate that Sicariois released at a time that we have seen so many anti-American films.  Sicariodoesn’t exactly smack you over the head with its sentiments, but its slow and meticulous style is something we have seen from so many similar films in recent years (A Most Wanted Man comes instantly to mind).  So while Sicario is definitely a well-crafted film it is one that is extremely hard to love.
Sicario follows idealistic FBI agent Kate (Emily Blunt) as she is handpicked by a mysterious governmental figure (Josh Brolin) to work on a special task force to find a drug cartel leader (Bernardo P. Saracino).  As she quickly integrates herself into the culture around the US-Mexican border she learns not everything is quite as it seems.
While the dark and pessimistic atmosphere of this feature can over power the film at many points, it’s not without its merits.  Emily Blunt and Benecio del Toro (as a man with knowledge of the cartels recruited by the CIA) deliver powerful performances.  Blunt at times makes you forget that she is not American and fully establishes herself as one of the best action stars in film today.  Del Toro, meanwhile, completely steals the film in the later stages as a quiet man that del Toro can abruptly and realistically install a sense of energy into.  It also helps that this is a beautiful film to look at (cinematographer maestro Roger Deakins does his usual great work) and listen to (the sound design is so realistic and Johann Johannsson’s score ratchets up the tension and the correct moments).
All that being said this film ultimately becomes a conspiracy theory film.  That’s not bad by any means.  JFK and Zero Dark Thirty (if you are to believe some opponents of the later film) are fantastic films.  However, Sicariojust comes to the same conclusion in the same exact style as so many recent films: America is as bad as its enemies.  While that may be true, it’s a tired conclusion to a film that begins with so much potential.

Sicario is a well made but it’s the type of film that’s been done way too many times before and not in the appealing and fun way so many blockbusters happen to be.
7/10
at October 21, 2015
Email ThisBlogThis!Share to TwitterShare to FacebookShare to Pinterest
Labels: 2015 films