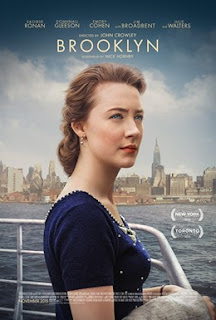 As a person of Irish descent it is always nice to see when Irish film productions breakthrough on the international stage.  In recent years, the Irish film community has had a major impact on film.  Whether its their acclaimed animated films (The Secrets of Kellsand Song of the Sea), the attention that the English/”Irish” McDonagh brothers brings to the Irish scenery in their films or the up and coming generation of actors such as Saoirse Ronan and Domhnall Gleeson, it’s hard to not notice the Irish in film today.  It’s for the latter reason that the Irish film community has been brought to the forefront once again as one of the most talked about independent films this year is Brooklynstars both Ronan and Gleeson.  With an Irish cast, and Irish director and an Irish book for source material, what could have easily been a stereotypical romance film is brought to the next level thanks to a unique Irish flair and a powerful lead performance.
Brooklyn follows Eilis (Saoirse Ronan), which is pronounced A-lish, as she grows bored of her Irish homeland and decides to immigrate to 1950s America with the help of a pastor.  While there she falls in love with an Italian boy (Emory Cohen), which creates problems when her sister (Fiona Glascott) dies and Eilis is tempted to go back home to help her lonely mother (Jane Brennan).
The film certainly does not break new ground, especially in the plot department, which has so many shades of past melodramas.  At least director John Crawley and writer Nick Horny make sure not to wallow in the melodrama as they focus more on character and less on plot.   It also helps that they tried to find every single way of bringing an air of authenticity to the film whether that’s through filming on location or the exquisite costume work from Odile Dicks-Mireaux.
It also helps that the film gets a knockout performance from Saoirse Ronan.  Ronan has shown that she has a talent whether it was in Atonement, The Lovely Bones or Hanna.  However, with such a powerfully optimistic performance as this, I think she will finally have her overdue breakthrough.  This is a stoic performance that she combines with the other talents she has put on display in the past making for her first truly complete performance.  While there isn’t another performance on her level in the film, it helps that every performance complement’s Ronan’s no matter how small (including Jessica Pare’s almost cameo level performance as Eilis’ boss).

Brooklyn is a simple yet beautiful film.
8/10
at October 14, 2015
Email ThisBlogThis!Share to TwitterShare to FacebookShare to Pinterest
Labels: 2015 films