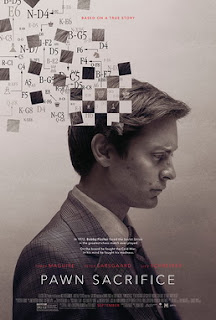 Bobby Fischer has always been a character that Americans have been fascinated with.  A hero that slowly went down a dark path is just too engrossing of a tale to ignore.  Many films have covered the chess grandmaster, including one of the better documentaries in recent years, Bobby Fischer Against the World.  So I was quite intrigued to see how Pawn Sacrifice, the latest film about Bobby Fischer, would add to his aura.  With underrated director Edward Zwick (Glory, The Last Samurai, Blood Diamond) and the very in demand Steven Knight (Locke and Peaky Blinders) as screenwriter, it certainly had a lot going for it.  Unfortunately, Pawn Sacrificeis a mess of a film.  While it doesn’t suffer from the greatest hits feeling that most biopics tend to suffer from, this film suffers from laying the more known aspects of Fischer’s life a little too thickly on the audience.  It’s a loud film that doesn’t really go anywhere.
Pawn Sacrifice actually covers a lot of ground in Bobby Fischer’s life (only really skipping his later years in exile), but most of the film focuses on Fischer’s (who is played by Tobey Maguire in the film) rivalry with the Soviets and his descent into madness, which the film tries to play up as a concurrent event with the rivalry.  Pawn Sacrifice probably isn’t the most historically accurate film, but you have to admire the job down by Steven Knight to ignore historical accuracy and go for something that should have been more dramatically appealing.
It’s unfortunate, though, that the rest of the script and a lot of Edward Zwick’s directing lands with a loud thud.  Many of the actions of the film just seem repetitive, which becomes a big problem when a lot of the actions are Fischer going crazy.  It also doesn’t help that a lot of the centerpiece Fischer-Spassky match is directed in such a stale manner.  There is no energy in the film at a point when it desperately needed it.  Ultimately, I end up taking very little out of this film, and that’s not good for a well-covered subject matter.
The cast at their very least tries their best.  Tobey Maguire does struggle at times in the role of Fischer, but that’s mostly because of direction that tells him to be as loud and noticeable as possible.  There is the occasional subtle moment that shows you there is something else to Maguire’s performance, but those moments are too few.  Meanwhile, Live Schreiber, Peter Sarsgaard and (especially) Michael Stuhlbarg all give memorable supporting turns.

Pawn Sacrifice is ultimately a tired portrayal of one of chess’ most famous tales.
5/10
at October 08, 2015
Email ThisBlogThis!Share to TwitterShare to FacebookShare to Pinterest
Labels: 2015 films