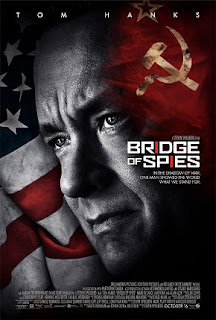 Steven Spielberg’s career over the last decade has seen the legendary filmmaker take an interesting turn.  It seems like 2005 was an end of an era for him when he unleashed the underrated tandem of War of the Worlds and Munich.  Since then it appears that Spielberg has been trying to adapt to a new style that combines catchy and wordy dialogue with old school style filmmaking.  War Horse and Lincoln are clear examples of this.  While neither of those two films were complete successes, they did showcase the potential for Spielberg to impress with his new style.  Finally, it has now all led to Bridge of Spies.  Bridge of Spies is the film that Spielberg has been building towards for the last decade.  It’s a wonderful old school film that will remind many of Mr. Smith Goes to Washington and other classics while still finding time for moments of comedy and suspense.
Bridge of Spies follows lawyer James B. Donovan (Tom Hanks) as he is asked to represent accused Soviet spy Rudolf Abel (Mark Rylance) in order to show the American justice system works.  When he feels an injustice is done, Donovan decides to take his work with Abel beyond what he was meant to and gets involved in a prisoner exchange between the United States and the Soviet Union.
Like most of his films as of late, the usual Spielberg tropes are mostly absent for this film.  In their stead, are the traits you would find in films of Hollywood’s Golden Age.  With gorgeous settings, long establishing shots, heroic heroes, and clear morals at play, it’s hard not to see that Spielberg has gone to old Hollywood tropes and does a pretty great job of using them.  While he has been working at this for a while, this is the first film in which it feels like Spielberg has honed his new style.  The visuals pop like they though do in War Horse and he handles the wordy script (co-written by the Coen brothers if you couldn’t tell by the well-placed and eccentric jokes throughout the film) well like he did in Lincoln.  Unlike those films, though, it feels like Spielberg is in complete control of the film from beginning to end.
Another master at the top of his game here is Tom Hanks.  While the comparisons are growing tired at this point it’s hard to deny that Hanks is this generation’s James Stewart, and he is never more so than in this role.  Hanks plays the role with such optimism and will power that it is quite striking he is able to convey a quietly dark side to the character.  It’s these tiny moments of doubt and darkness that allows Hanks to elevate this role to the next level.  It also helps that Hanks has a talented cast for him to play off of whether it’s a ton of bit roles casted perfectly or world renowned theater actor Mark Rylance finally getting an opportunity to display his impeccable craft on the big screen.

Bridge of Spies is Spielberg’s best film in a decade.
8.5/10
at October 06, 2015
Email ThisBlogThis!Share to TwitterShare to FacebookShare to Pinterest
Labels: 2015 films