The Man From U.N.C.L.E. Review 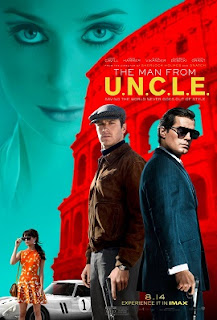 Guy Ritchie has always been known for directing movies that have a unique and energetic visual style.  His latest certainly has that in spades.  The Man From U.N.C.L.E., a remake of the 1964 TV series, is a film that survives almost entirely on its style, that is until its clichéd plot causes it to derail in the third act.  It may not be great filmmaking, but as an end of summer trip to the theatre you can do a lot worse.
The Man From U.N.C.L.E. follows Napoleon Solo (Henry Cavill), a thief turned CIA agent, that is forced to work with KGB operative Illya (Armie Hammer) in order to stop a billionaire (Elizabeth Debicki) from becoming a nuclear power.  The plot ultimately doesn’t come with many surprises, and this really hurts in the third act when the film tries to surprise the audience with a bunch of twists.
The plot structure isn’t enough to destroy this film, but it certainly wouldn’t be very watchable if the other components of the film weren’t as good as they are.  Ritchie and his team of artists create a Cold War setting that is flashy and fun whether it is the stunning costumes or the sly use of music.  The style may not be realistic, but it does engage you.  Also working to the film’s benefit are some great casting choices.  Henry Cavill hasn’t had many opportunities to prove himself as an actor (in The Tudorshe got lost in a big cast and a stale story and in Man of Steel he got lost among the effects and some terrible thematic decisions) so it was nice to see his charismatic charm be put to good use here.  He is clearly having fun and it’s hard not to enjoy that.  Meanwhile, Alicia Vikander continues her monster year with another performance that shows why she is becoming such a breakout star.  She doesn’t get a lot to work with, but she makes good use of it.  Armie Hammer (who is solid here but ultimately settles in as the third wheel of the main trio) and Jared Harris (doing his usual great character actor work) are also good here.

The Man From U.N.C.L.E. is definitely one of those films you enjoy while watching but forget about it the instant it ends.  Playing at the end of the summer it is one of the better options out there even if it would have been completely lost in the competition if it played during the summer or holiday season.
7/10
at September 09, 2015
Email ThisBlogThis!Share to TwitterShare to FacebookShare to Pinterest
Labels: 2015 films