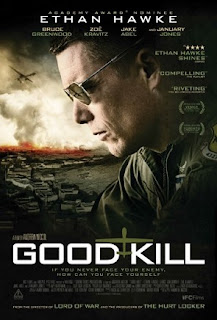 One of the more underrated filmmakers of the late 1990s and early 2000s has to be Andrew Niccol.  He started with a bang as his feature film debut ended up being the great sci-fi film, Gattaca.  He then followed that up with his Oscar nominated screenplay for The Truman Show.  While his next few films didn’t hit those highs again they weren’t without highlights (Lord of War is quite a blast).  Unfortunately, he has since fallen on hard times.  In Time was decent but the film community didn’t think so and The Host got an even worse reception.  So it was nice to see Niccol try to get his feet back on solid ground again with a familiar co-worker in actor Ethan Hawke (who is having a real renaissance as of late with career best work in Before Midnight and Boyhood and a great reception for his directing on Seymour: An Introduction).  Their new collaboration, Good Kill, finds an intriguing subject matter in the moral use of drones and gets some great use of it.  I wouldn’t call Good Kill memorable, but it is certainly well made.
Good Kill follows Major Egan (Hawke), a former Air Force pilot who is now stuck piloting drones in some random building in the middle of the Midwest.  While war was never a problem for Egan, he does finally begin to break when viewing acts of war from a far.  While some films and television (24: Live Another Day had had the most effect with this thus far) have tried to do a story on the use of drones and question their morality, none have exactly done a complete job of it so far.  The psychological aspect is an interesting one for Good Kill to take, and it does a lot with it.
Unfortunately, Good Kill is missing the visual expertise of some of Andrew Niccol’s better work.  He still seems like he is trying to find his footing again after a series of stumbles, and the dull setting seems to be too much of a challenge for him at times even if it does add a bit of realness to the film that helps elevate it.  It’s ultimately a minor quibble as Niccol’s script does a fantastic job of delving into the mind of Egan and his fellow members of his drone unit.
Speaking of the unit, this film is filled with fantastic performances.  Hawke just gives off the confidence of a man that is on the top of his game and knows it while Bruce Greenwood gives another great performance as the stoic unit leader that occasionally shows cracks in that stoicism.  Even the so far up to date unremarkable Zoe Kravitz delivers a strong performance as Egan’s protégé.

Good Kill is a step back on the right track for director Andrew Niccol.
8/10
at September 15, 2015
Email ThisBlogThis!Share to TwitterShare to FacebookShare to Pinterest
Labels: 2015 films