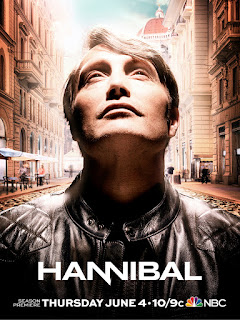 In its first two seasons, Hannibal was easily one of the best shows on television.  It was a work of true art and solidified itself into the best portrayal of the Hannibal Lecter series yet (yes, better even than the Oscar winning The Silence of the Lambs film).  In comparison, season three has to be considered a disappointment.  While it gets the big moments right and ends with a fitting finale, the third season of Hannibal struggles with consistency in a way that the first two seasons never did.

The third season of Hannibal picks up with Hannibal (Mad Mikkelsen delivering a performance so strong and unique that it is able to live outside of the shadow of Anthony Hopkins’ iconic portrayal of the character) hiding out in Italy.  However, the days are numbered for his new lifestyle as he once again has the urge to kill while Will Graham (Hugh Dancy), Jack Crawford (Laurence Fishburne), Dr. Bloom (Caroline Dhavernas) and Mason Verger (Joe Anderson as a solid replacement for Michael Pitt) look for every little clue of his whereabouts.  The pickup from season two’s shocking conclusion comes to a rather disappointing end here, as the status quo doesn’t really change at all for the characters involved.  For such a monumental moment in the show’s history not much comes of it, and that results in a first half of the season that takes a long while to get going.  A midseason transition to the Red Dragon plotline also suffers from similar problems.  Although as an extension of the show’s already beautifully unique visual style, this storyline fairs much better.

Despite these problems, there are still the moments of greatness that this show has given us so much of to be found (even if there is a lot less of them), and none of them is greater than the final sequence of the show.  Having been cancelled midway through the season it was unknown if showrunner Bryan Fuller found a way to wrap up the series in a satisfying conclusion.  While the show does end on a (literal) cliffhanger, thematically there couldn’t have been a more definitive ending, and that feels just like the way to go for a show as artistic as this.  As we watch Will push and go down with Hannibal over the sea-eroded cliff it is hard not to see it as a symbol of Will finally submitting to his more animalistic side that Hannibal has been trying to turn him to from the show’s very beginning.

The third season of Hannibal is a fitting end to the series even if it is a disappointment on its own.

7.5/10
at September 08, 2015
Email ThisBlogThis!Share to TwitterShare to FacebookShare to Pinterest
Labels: 2015 tv