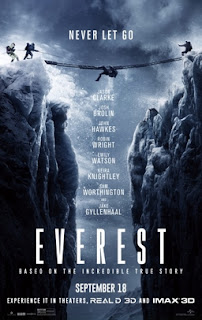 Reading the source material of a film can have a momentous impact on how you view that film.  I think one of the biggest cases of this in recent memory is Everest.  While Everestis not based off of any book, it is based off of real life events that were made famous by Jon Krakauer’s bestseller Into Thin Air.  While I really enjoyed the visually stunning and narratively intense nature of Everest, I can completely see someone without the knowledge of Everest history or what occurs in Krakauer’s book coming out of this feeling the way most critics did about the film: visually impressive but very disjointed.
Everest follows the owner of a mountain climbing company, Rob Hall (Jason Clarke in a solid but unspectacular role until the great work he puts in during the third act), as he coordinates an attempt at summiting Mount Everest during May of 1996.  As Hall’s group and the other groups on the mountain struggle to coordinate, trouble arises when a storm hits the area just as most of the climbers are at the top part of the mountain, known as the Death Zone thanks to its very limited supply of oxygen in the air.
This has to be one of the most visually stunning films of the year.  Director Baltasar Kormakur has thus far been only known for Mark Wahlberg action films but he clearly has a future as a filmmaker because him and his team make the Everest setting look so realistic.  I don’t know how they pulled it off but it is so technically impressive I don’t really want to know or it would ruin the magic.
The first half as it shows how beautiful the mountain and nature can be would make Terrence Malick happy, and the second half as it terrifyingly but beautifully shows how dangerous nature can be would impress even the likes of Werner Herzog.  While that can be a strength of the film it also happens to be its major weakness.  This is a film of two halves that don’t really mix together unless you can pick up on some of the subtle clues that only an Everest history expert or repeat viewer would be able to.  The film begins as a heroic adventure film but unexpectedly descends into a horror film and that may be too jolting of a transition for some viewers.
As someone who has found this tale intriguing for years now, I couldn’t help but love this film though.  It may be a Hollywood-ized version of the tale, but it does touch on almost everything that Into Thin Air does including the battle between greed and nature that happens to be the main theme of the book.  It’s also hard not to be impressed by the massive cast that features great turns from Josh Brolin as cocky Texan Beck Weathers with a secret ailment, Keira Knightley in a devastating turn as Rob Hall’s wife and even Sam Worthington in a stoic turn as a partner of Rob’s.
Everest is an impressive portrayal of one of the legendary mountain’s most infamous tales.
9/10
at September 24, 2015
Email ThisBlogThis!Share to TwitterShare to FacebookShare to Pinterest
Labels: 2015 films