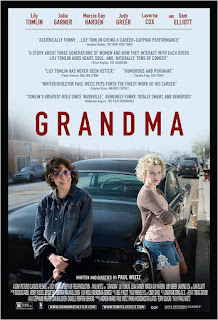 It seems like the Sundance Film Festival has created its own type of genre.  Sure, you can find a large variety of documentaries and the festival does have the occasional awards contender, but your typical film that comes out of the festival is the quirky comedy that you can just instantly tell played at the Sundance Film Festival at one point.  I brought this up for Me and Earl and the Dying Girl, and it holds true for the latest Sundance film to be released into theaters, Grandma.  Grandmais filled to the brim with quirkiness, and the fact that this has become so typical for this type of film becomes a problem for it.  Luckily, it is able to survive off of a trio of strong performances led by Lily Tomlin in her first starring role in over two decades.
Grandma follows Sage (Julia Garner proving herself to be a strong up and coming actress after a memorable stint on The Americans) as she tries to get help from her eccentric grandma (Lily Tomlin) when she needs to get an abortion.  The film plays out as a very weird buddy comedy of sorts that will have any conservative running for the hills.  This really is a hardcore Republican’s worst nightmare of a film and that goes for some added laughs throughout if you aren’t one.
Director and writer Paul Weitz has always been your typical workman director and the film feels very much of that nature.  It constantly feels like it’s fitting a set pattern and even the small details of the film feel like they are there because they worked somewhere else before.  The film is ultimately effective because of this but it also feels a tad stale and obviously isn’t breaking any new ground whatsoever.
Fortunately, the film has three great performances at its center.  Lily Tomlin gets to play a multi-layered loud mouth that she obviously enjoys performing.  It’s constant fun to see where Tomlin takes the character.  Meanwhile, Julia Garner more than holds her own against a much more showy co-lead.  This is clearly an actress that we need to keep an eye on.  Marcia Gay Harden also impresses in a supporting turn that starts off as very one note, but Harden is able to subtly find ways to add depth to the character.

Grandma is a fun but unsubstantial buddy comedy between a young woman and her grandma.
7/10
at September 24, 2015
Email ThisBlogThis!Share to TwitterShare to FacebookShare to Pinterest
Labels: 2015 films