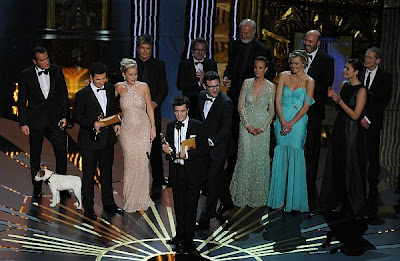 So finally it is over.  I have to be honest and say that this year's awards season got a little too long and way too predictable.  Despite that the Oscars (as always) were an entertaining end to the season.  While what follows may seem like a slam against the Oscars the awards ceremony is still much better than any other awards show during the course of the year, and it always pains me to know that I have to wait another full year for the next installment.

Let's start off by saying that I went 16/24 which is not so good (predicting upsets that were probably never really going to happen in Live Action Short and Original Song killed me).  However, I went 7/8 in the top categories which just goes to show how predictable this thing got.  Meryl Streep winning Lead Actress was the only one I didn't get, and that win was a bit unfortunate.  Streep now has 3 Oscars with another nomination most likely on the way for next year's installment.  Meanwhile, Viola Davis (who gave a very strong performance in The Help) will probably struggle to get such a role again.

As for the ones I did predict correctly, Dujardin and Hazanavicius made for nice winners although the latter wasn't the best of his category (especially in a category that had Terrence Malick).  The former had a fun speech and was easily the happiest winner of the night.  The supporting actor winners were a bit disappointing (yet inevitable).  Octavia Spencer gave an inferior performance to her own co-star, but we should probably count our blessings that Melissa McCarthy didn't win (considering the outcome of the lead actress category and the reception McCarthy got when her clip played this was probably a much closer race than we thought).  Christopher Plummer was one of the weaker nominees in a very weak Supporting Actor field but his speech almost justified his victory.  It was easily the best of the night and its hard to deny that Plummer should have an Oscar before his career ends.


The screenplay categories provided two of the better victories of the night.  Midnight in Paris was the strongest of its field (and strongest of any original screenplay this year), and The Descendants was a nice win for the fact that Dean Pelton (the always hilarious Jim Rash) is now an Oscar winner.

The animated (yea for Rango), documentary (I can't wait to see Undefeated), foreign language (A Separation was the only justifiable option) and shorts (a nice win for The Shore) categories produced worthy winners but the same cannot be said for the technical categories.  These awards obviously need some major revamping.  Hugo's run through these categories was just laughable (cinematography over The Tree of Life, visual effects over Rise of the Planet of the Apes, the sound categories over everything else), and shows that every Academy member voting on every category is just not working.

As for the show itself, it was a mess.  The opening (along with a Morgan Freeman intro that should now become a requirement for every awards show) was classic Billy Crystal.  Safe but effective.  The montages then began and never seemed to end (what the hell was with that one montage that included immortal lines from film history along with clips from Twilight?).  The show featured a cirque du soleil performance (which the Muppets were wasted introducing) that just felt superfluous from the angle of the tv viewer.  Many of the categories were introduced with awesome interviews with cast members from each nominee (the highlight being the Best Director one), but the intro wasn't included for one of the most important technical categories (cinematography).  And I haven't even mentioned yet that the producers were completely oblivious to a sound quality issue on the telecast.  To be honest, it seemed like Billy Crystal and Brian Grazer were playing for the room and completely ignoring the audience.  While that style did provide some great moments, they shouldn't be brought back again if thy plan on doing that again.

As for The Artist winning Best Picture, it's neither a good nor bad Best Picture winner.  It is what it is.
at February 27, 2012
Email ThisBlogThis!Share to TwitterShare to FacebookShare to Pinterest
Labels: 84th Academy Awards