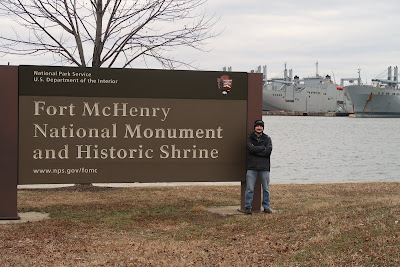 Last week I was able to visit the site of an under reported moment in American history, albeit one that is instrumental to the American identity.  Fort McHenry National Monument and Memorial Shrine is the site of the Siege of Baltimore during the War of 1812.  The War of 1812 is largely forgotten in American history, but it was during the Siege of Baltimore that Francis Scott Key was inspired to write the “Star Spangled Banner”.

Fort McHenry is tucked inside of the Baltimore Harbor and it’s located in a gated section of the harbor.  As you enter the gates, the visitor center is directly ahead.  The first thing you have to do when you get to the visitor center is watch the site’s video.  The video gives a good overview of the events that happened here and includes some interesting interactive elements.  The visitor center also has a couple of exhibits that do a great job of explaining the causes and effects of the War of 1812.  There was clearly a lot of work done to make sure visitors come away from this place with a proper understanding of the war.

In the visitor center there is a back exit that leads to the fort.  There is an entrance fee into the actual fort but it’s well worth it.  The views from the fort gives you glimpses of the rest of the Baltimore Harbor, and almost everything in the fort is accessible.  There seems to be an exhibit inside every single door in the place, and a lot of the rooms try to maintain a 19th century aesthetic.


Surrounding the fort is a path alongside the water.  It seems like a great place for jogging.  Signs on one side of the path try to point out the numerous waterfowl that call this place home, but it was a cold, somewhat wet day when we went so all we saw was a couple of ducks.  We weren’t jogging either, but the path gave us a nice stroll that led us to a couple of statues in front of the fort that were dedicated to some of the leaders of the battle.

All in all, Fort McHenry is a must visit location as it does an extensive job of giving the War of 1812 its due.

at February 03, 2020
Email ThisBlogThis!Share to TwitterShare to FacebookShare to Pinterest
Labels: national parks