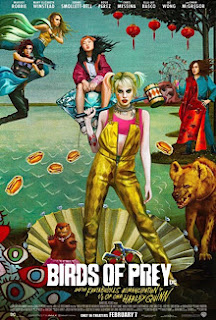 While Disney and Marvel have been dominating the cinematic world, the comic book company’s arch rivals, DC, haven’t had as much luck in their cinematic partnership with Warner Bros.  Ever since the Dark Knight Trilogy ended almost a decade ago, Warner Bros and DC stumbled with their attempt at a cinematic universe.  There has been the occasional hit in their cinematic universe like Wonder Woman (which actually was a critical success and a box office juggernaut), but it wasn’t until last year’s Joker, which completely abandoned the cinematic universe format, that the companies really hit it big.  It’s odd then that Warner Bros and DC’s newest release is Birds of Prey (and the Fantabulous Emancipation of One Harley Quinn), a movie that not only takes place within the DC Cinematic Universe but also references a completely different version of the Joker character that appeared in Joker.  Fortunately, the movie itself is much better than the odd release strategy.  Birds of Prey is a lot of fun as numerous stylish action sequences and witty, fourth-wall breaking dialogue overshadows a slight plot.

Birds of Prey (and the Fantabulous Emancipation of One Harley Quinn) takes place in the aftermath of the breakup of Harley Quinn (Margot Robbie in a well deserved starring role) and the Joker (the Jared Leto version although he never appears onscreen).  With no protection from the crown prince of Gotham’s underworld, Harley finds many of her previous victims looking for revenge, which ends up leading her on a journey with a young girl (Ella Jay Basco) who holds the key to a former kingpin’s fortune.  The plot is completely filled with typical superhero and action movie tropes so the movie can get a bit tired when it stops and takes a breather.  However, this movie rarely does as it goes from showcasing a funny gimmick to delivering an energetic action sequence before it goes back into delivering funny zingers.

This movie is 100% sugar so if you like that kind of diet you will love this, and director Cathy Yan does a shockingly good job of never letting this style feel overbearing.  The movie does take a while to get going as it deals with the baggage of its predecessor (2016’s terrible adaptation of Suicide Squad), but once it gets past the Joker relationship stuff and becomes just a Harley Quinn movie it turns into a blast.

Almost everyone in this movie looks like they’re having fun.  Margot Robbie does great in her return to the role as Harley Quinn feels more like a real character in this one than she did in Suicide Squad.  Ewan McGregor is hamming it up big time (but in an enjoyable way) as the movie’s villain, and Mary Elizabeth Winstead, Jurnee Smollett-Bell and Rosie Perez give the impression that they can be good additions to this franchise (although there is too much going on in this movie for them to leave a complete stamp on their roles) as the members of this movie’s superhero team up squad.

Birds of Prey is about as different as you can possible be from DC’s last movie, Joker, but it still succeeds because it knows that it’s just dumb fun and it finds a way to make that as energetic as possible.


7/10
at February 07, 2020
Email ThisBlogThis!Share to TwitterShare to FacebookShare to Pinterest
Labels: movies