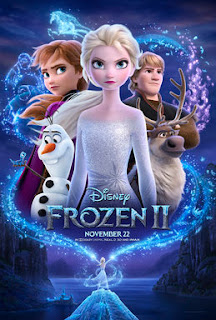 It seems like 2019 was finally the year that Disney became ubiquitous.  The top 2019 box office hits list is littered with Disney movies (Endgame, The Lion King, Captain Marvel, Toy Story 4 etc.) and Disney just released their streaming subscription service to truly begin the Streaming Wars.  This trend continues this weekend with the release of the sequel to one of its bigger hits in recent times: Frozen II.  The two things that made Frozen work so well were its incredible soundtrack (“Let It Go” and “Do You Want to Build a Snowman?” are still some of the best movie songs of the decade) and its story based around two sisters and their relationship with each other.  Frozen II is more than aware of its predecessor’s strengths, but it tries too hard to once again go down this path and it all ends in rather mixed results.

Frozen II picks up a few years after the first movie as Elsa (voiced by Idina Menzel) and Anna (voiced by Kristen Bell) reign over an era of peace and prosperity.  That is until a mysterious voice that Elsa hears causes her to unleash a tornado on Arendelle and begins a journey to an enchanted forest to get control over the Elemental Spirits.  Frozen II is a classic case of a sequel going into the past to build more story for its characters as Anna and Elsa’s parents play major roles in the adventures and trials that the two come across in this movie.  Unfortunately, this strategy feels all too familiar in this movie and the the overall execution of this movie’s story is even worse (a very dramatic turn at the end of the second act is quickly resolved a few scenes later for instance).  That being said the relationship between Anna and Elsa still works well (even if it does lose its uniqueness here), and it’s enough to power the movie until the end.

The other strongpoint of the first movie, the soundtrack, also falters here.  While there are multiple attempts at capturing the magic of “Let It Go” (Idina Menzel gets two power balls in this one), I have a hard time seeing anyone remember any of these songs a couple of weeks from now.  The weakness of the soundtrack is made even more apparent when one of the characters makes a dig at how outdated “Let It Go” seems now in a meta joke that falls flat.

This movie does improve on its predecessor in one way though: its visuals.  “Elemental spirits” being such major characters gives the movie a lot to work with when creating these characters and the movie explores that in some interesting ways.  Additionally, the CGI has improved enough from the first movie where you can actually notice the detail that has gone into such things as the costumes that the characters wear.  Even if the story falters and the soundtrack falls flat this is still a beautiful movie to look at.


Ultimately, there was a sense of uniqueness to the original Frozen that is all but lost in this followup.  This isn’t a bad movie by any stretch, but when a character remarks that this is really the end this time during the climax of Frozen II I really hope that’s the case.

6/10
at November 22, 2019
Email ThisBlogThis!Share to TwitterShare to FacebookShare to Pinterest