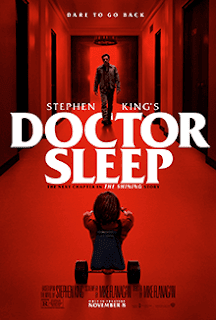 I have never been a fan of Stephen King.  I’m not much of a horror fan but even with King’s books that have delved more into the realm of science fiction I have found his writing to be too self indulgent in its use of graphic descriptions.  There’s no problem with being graphic in your writing but at some point you have to stop describing one situation and just get on with the plot.  So obviously, the Stephen King movie adaptation that I have liked the most to date is The Shining.  Whereas King’s style is more matter of fact, Stanley Kubrick has always favored a more ambiguous style to his storytelling and that really helps with the adaptation of The Shining.  Almost 40 years on, we have now been gifted with a sequel to both the movie adaptation and King’s book in the form of Doctor Sleep.  While this movie clearly favors the King approach to the Kubrick approach, there is still a lot to admire in this movie including a first rate cast and some admirable if imperfect filmmaking choices.

Doctor Sleep picks up with a now adult Danny Torrance (played for most of the movie by Ewan McGregor) as he tries to live a normal life while battling alcoholism and his Shining powers.  Yet he is brought back into another supernatural battle when he becomes aware of a group of supernatural people feeding on children through a telepathic conversion with a girl (Kyliegh Curran proving she definitely has a career in the acting business) with Shining powers more powerful than his.

The plot is ultimately as ridiculous as it sounds, and the movie becomes even more ridiculous when its third act just becomes really blatant fan service.  However, the cast of the movie does wonders in grounding it all.  Ewan McGregor does wonders in roles like these where he is playing the straight man role in a world of craziness (think of his role in The Ghost Writer or even the Star Wars prequels).  There isn’t anything flashy with his performance, but that allows his subtle portrayal of weariness and vulnerability to really sink in.  This is in distinct contrast to Rebecca Ferguson as Rose the Hat, the leader of a group of Shining individuals who feed on others to live longer than normal lives, who is clearly having a lot of fun with her role.  Ferguson plays a pretty basic villain but she brings so much charisma to the role that I really hope she gets more roles like this in the future.

Additionally, the movie relies heavily on flashbacks and hallucinations so characters from the original movie and book come back into play.  Director Mike Flanagan decides to handle this in a fashion that feels both outdated and unique in today’s age of cinema.  All the returning characters are played by similar looking actors to their original counterparts.  Most other movies today would have used complete CGI renders or de-aging effects.  While this works for the return of some characters, this movie does rely on some of the original movie’s most iconic characters coming back in important fashion and the half baked attempt at recreating this comes off as something that Kubrick would never get caught doing.

That being said there’s a lot of really admirable choices on the part of Mike Flanagan.  For one, there are no jump scares in this movie.  That really stands out in today’s horror genre and it also allows the more psychological aspects of this movie to stick out.  Also Flanagan makes sure that the final edit of this movie is a really good one.  The movie is long as it approaches two and a half hours in total, but it rarely feels as such.  Almost everything seems vital.

Ultimately, there is a lot to like from a filmmaking aspect in Doctor Sleep.  The story is a bit derivative and the third act gets to be really silly in its use of fan service, but the cast and visuals stand out enough for it to be a fun night at the movies.

7/10
at November 07, 2019
Email ThisBlogThis!Share to TwitterShare to FacebookShare to Pinterest
Labels: movies