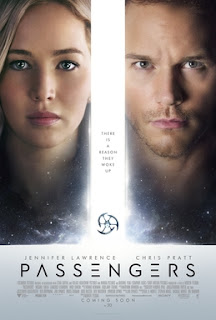 From the very instant that Chris Pratt and Jennifer Lawrence signed onto Passengers, the film was going to be all about the star power of these two individuals working together.  The film itself succeeds mostly because of that star power and the legitimately good performances that they bring to the table.  Passengers has problems (a morally disturbing ending and some lackluster world building), but thanks to the pair of Pratt and Lawrence it’s an enjoyable experience at the theater.
Passengers takes place in a future in which humanity has learned how to colonize far off Earth-like planets.  On one of these colonization expeditions, the spaceship goes through an asteroid field, which causes Jim (Chris Pratt) to be woken up from his hibernation chamber.  As he begins to suffer as the only one awake on a spaceship that won’t reach its destination for almost another century, Jim begins to contemplate waking up a fellow traveler (Jennifer Lawrence).  Obviously, the morally ambiguous nature of a scenario in which someone subjects another person to a life that they weren’t intended (and probably wouldn’t want) to have just so you don’t get to be lonely is a tricky issue that this film struggles to contend with.  The resolution to this plot thread will certainly raise eyebrows and mostly for the wrong reasons (even if it does follow the conventional blockbuster plot threads).
However, this film ends up being quite enjoyable.  Chris Pratt gives a tremendous performance that has been ultimately lost behind the controversy of the plot.  He gets to play a dramatic side that we haven’t really seen from him yet here and he delivers big time in the opening act of the film where he is asked to carry the entire film almost by himself.  For a film that’s billed as a Jennifer Lawrence starrer, she doesn’t actually show up until about thirty minutes in.  Although once she does her natural charm allows her to add another dimension to the film.

If it weren’t for these two performances we would be talking about a different cinematic experience entirely.  Behind the troublesome ethical issues that this film bungles and a sci-fi world that offers nothing new and relies way too heavily on CGI that needed another round or two of polishing it is a shock that Passengersworks at all.  Star power still apparently matters.
7/10
at February 23, 2017
Email ThisBlogThis!Share to TwitterShare to FacebookShare to Pinterest
Labels: 2016 films