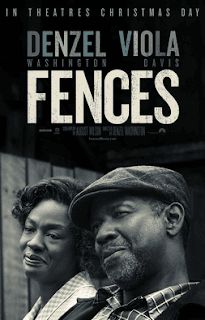 There are some films out there that exist only to display craft.  Whether it’s a visual effects tent pole or a performance in search of a plot, these films tend to come off as incomplete.  They put so much attention into their craft that other elements of the film suffer.  Yet these films are so powerful in at least one aspect that they can be quite interesting even in their failures.  Fences, Denzel Washington’s adaptation of the August Wilson play, is one of those films.  As an exercise in acting and dialogue it is quite powerful even if the story loses its way in the cinematic transition.
Fences mainly serves as a vehicle for Denzel Washington who not only directs the film but stars as Troy, a former Negro Baseball League star that enters a midlife crisis after he encounters a new woman and has an incident at work.  The film mostly takes place at Troy’s house where he interacts with his wife (Viola Davis), co-worker (Stephen Henderson), brother (Mykelti Williamson) and two sons (Jovan Adepo and Russell Hornsby).  This allows Washington not only a host of great actors to play off of but a limited visual palette that challenges Washington’s direction (a challenge that he takes on quite well until the final act).
The play-like nature of the film will turn some people away, but it’s hard not to enjoy Washington and Viola Davis relish in multiple monologues that allow them to take full command of the screen.  Despite this, there is still a lot of room for an actor like Stephen Henderson to really ace a much more subtle performance where he mostly acts as the voice of reason within the story.  Adepo, Williamson and Hornsby also are given enough time in the spotlight to create one of the most well rounded casts in recent memory.
The film does get into troublesome ground in the final act as the film takes on a much more darker nature (although a nature that is definitely forewarned in the rest of the film).  The character of Troy just becomes so much more complex as the film nears its end, and while Washington is able to handle that with his acting, it becomes too much of a challenge for him with his direction.  The themes of the film become jumbled, and the unorthodox storytelling style of the final scenes comes across as jarring rather than new and exciting.

As a display of acting it’s hard to get better than Fences, but some creative stumbles in the final act leave this as a film that doesn’t quite reach its potential.
7/10
at February 23, 2017
Email ThisBlogThis!Share to TwitterShare to FacebookShare to Pinterest
Labels: 2016 films