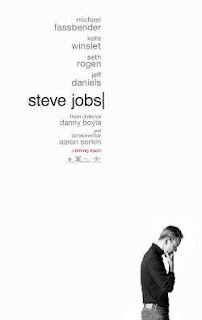 Aaron Sorkin’s last two feature films (The Social Network and Moneyball) have received a lot of critical acclaim.  Certainly, a lot more than his recent television shows (Studio 60 on the Sunset Strip and The Newsroom) where his contributions have been critically maligned.  So it was interesting to see Sorkin once again work with an auteur director on his latest film as Danny Boyle was at the helm of Steve Jobs.  Fortunately, for Sorkin his trademarks shine through the entire course of the film whereas Boyle’s trademarks (most noticeably his hyper kinetic use of editing) are forced into the background.  Unfortunately, for the viewer this isn’t always for the best.  While Sorkin’s quippy dialogue is as good as ever, the story of Steve Jobs is structured in an unnecessarily gimmicky format that forces the film into a ridiculous ending that destroys a lot of what comes before it.
Steve Jobs follows Steve Jobs (Michael Fassbender) as he deals with life and business crises during the unveilings of the Apple Macintosh, the NeXT Computer and the iMac.  While this sets up an interesting format that seemingly allows Aaron Sorkin’s dialogue to flow beautifully through the film, it ultimately betrays the film in the last act.  It is here that we begin to realize that the storylines set up in the earlier acts cannot be paid off in this particular format.  That doesn’t stop Sorkin and Danny Boyle from trying as they lead us to a ridiculous ending that revels in the unexpected happiness of the main characters even if these feelings are by no means justified in the slightest.
Despite the limitations of the film’s structure being spectacularly unveiled in the final act, there is a lot to enjoy in the film before this.  Sorkin’s dialogue is a delight to hear throughout, and this film has the perfect cast to speak it.  Michael Fassbender was seemingly an odd choice for Jobs as they look very little alike and Fassbender tends to have problems nailing down an accent.  Yet he completely owns the role.  You forget Fassbender is there as he speaks the Sorkin dialogue like a natural.  Kate Winslet also gives a strong performance as the closest thing to a hero in this film.  Meanwhile, Seth Rogen, Katherine Waterston and Michael Stuhlbarg give performances that can’t quite be called scene-stealing (considering how much of a firecracker the Jobs character is), but they definitely are memorable performances that feel right at home in this world.

Steve Jobs is Aaron Sorkin at his finest until the film crashes and burns in a finale that is unwarranted in every single aspect.
7/10
at November 05, 2015
Email ThisBlogThis!Share to TwitterShare to FacebookShare to Pinterest
Labels: 2015 films