Beasts of No Nation Review 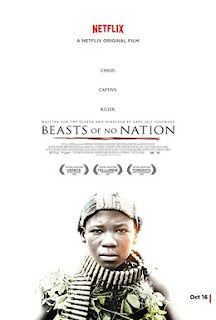 We have reached a stage where war films can’t really get much more horrifying.  When Saving Private Ryan was released in 1997, many pointed to the Invasion of Normandy Beach sequence as a major turning point in realistically depicting the brutality of war.  Now that sequence just looks like so many others that have come out in the almost two decades since (not trying to criticize Saving Private Ryan with this point as it is not only a great film but one of Spielberg’s best).  It’s almost impossible to make the brutality of war unique in cinema nowadays.  That doesn’t mean it will stop directors from trying, though.  The latest to attempt this is Cary Fukunaga (hot off of the heels of his fantastic work on the first season of True Detective) with the first Netflix released feature film ever, Beasts of No Nation.  The film ultimately comes across as an homage to Apocalypse Now, albeit one where we learn the motives of Colonel Kurtz, which makes for an interesting storyline.  However, the incredible amounts of bleakness and brutality that are on display here make it an extremely tough watch.
Beasts of No Nation follows a young boy (Abraham Attah) in an unnamed African country.  While growing up in a buffer city between the government forces and numerous rebel armies, his family is killed by government troops and he is forced to flee into the jungle.  This is where he runs into a rebel army that forces him into their army and he faces the hardships of a child soldier.
If anyone was to make brutality unique on the screen again, Cary Fukunaga certainly would be a good bet to do so.  He here once again brings a stunning visual palette (including a couple of his trademark tracking shots) that is able to balance out the dark material to some extent.  This is a film I never want to see again, but it is hard not to remember some of the gorgeous scenery put onscreen.
It also helps that Fukunaga’s screenplay (from a book by Uzodinma Iweala) puts some interesting spins on many of the clichés of the war genre.  One of the most interesting examples of this is that the film actually gets you into the mind of the Colonel Kurtz archetype.  The archetype in this film comes in the form of Idris Elba’s unnamed military commander.  The film actually makes you see why Elba’s character would make the despicable actions that he does (even if it doesn’t justify them), and Elba gives such a charismatic and imposing performance that it’s hard not to enjoy what he is doing here.

Beasts of No Nation is a well-made film that is hard to love thanks to a brutal depiction of child soldiers.
7.5/10
at November 05, 2015
Email ThisBlogThis!Share to TwitterShare to FacebookShare to Pinterest
Labels: 2015 films