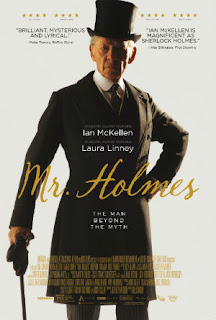 With successful film and TV franchises being released in recent years, it’s difficult not to find a Sherlock Holmes story that interests you.  I personally prefer the energetic, Benedict Cumberbatch-led Sherlock, but it’s hard not to enjoy just how consistently well done the other versions have been in recent years.  The latest Sherlock Holmes project to be released into theatres, Mr. Holmes, not only gives the Holmes tale a unique spin but also features one of our greatest actors giving one of his best performances ever.
Mr. Holmes takes place in post World War II England with an old Sherlock Holmes (Ian McKellen) retired to a countryside abode where he takes care of his bees and tries to find a cure for the Alzheimer’s disease that is defeating him.  When a boy (Milo Parker) asks about his time as a detective, Sherlock tries to remember the result of the case that made him retire.
Anyone who comes into this film thinking their going to get the energetic screenplay or the kinetic action of recent Sherlock Holmes installments are going to be disappointed.  This is a slow burn that really takes a while to kick into gear.  The construction of this story is meticulous as throwaway lines early on end up becoming major plot points.  So this film asks a lot of focus from its audience members.  It doesn’t always deserve this focus, as the first half of the film can be a tad boring, and Bill Condon’s direction doesn’t go anywhere interesting.  However, the revelations of the third act and the character change that Sherlock endures are quite fascinating and actually deserved.  This is a fitting end to Sherlock Holmes, and I think this film deserves a lot of credit for bringing author Mitch Cullin’s vision to the screen.
The one thing that truly makes this film a success, though, is Ian McKellen’s performance.  McKellen is one of the best actors of his generation, and it is just a delight to see him get another performance at his age that takes full advantage of all of his talent.  McKellen is able to bring so much realness to a man that is physically on the verge of death, while still bringing a lot of life to a film that desperately needs it at times.

Mr. Holmes will end up being one of the more memorable Sherlock Holmes adaptations in a decade already filled to the brim with them.
8/10
at August 04, 2015
Email ThisBlogThis!Share to TwitterShare to FacebookShare to Pinterest
Labels: 2015 films