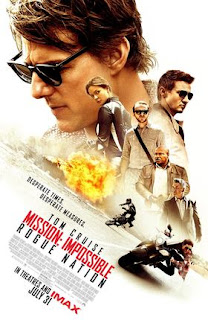 The Mission: Impossible franchise seems to be one of the very few cases of a film series getting better as it goes along.  The original film (which itself is based off of a 1960s TV series) is a typical 90s blockbuster that doesn’t age too well, and its sequel is the typical case of diminishing returns.  However, something strange happened when J.J. Abrams took over the franchise with 2006’s Mission: Impossible III as the film turned out to be the fun blockbuster that this series was striving for and failing to achieve all along.  The series reached its pinnacle with Brad Bird’s Ghost Protocol, and now the latest entry into the series, Mission: Impossible – Rogue Nation, finds new ways to inject energy into this aging franchise even if it isn’t quite as good as the two previous entries.  The film finds new ways to make the series interesting while still standing on its own perfectly fine.
Rogue Nation begins with the CIA taking over the IMF after the events of Ghost Protocol make Congress question the purpose of an agency with so little oversight.  Making matters worse for everyone is that Ethan Hunt (Tom Cruise) is on the hunt of the mysterious evil organization, the Syndicate, that no one else seems to believe exists.  Ethan must find proof of the Syndicate’s existence before the CIA can bring him in.
Rogue Nation oddly feels much more like a Bond film than a Mission: Impossible film.  One of the main characters of the film very much fits the Bond girl profile, the main villains of the film are almost an organization out of an Ian Fleming book, and Britain even plays a key role in the film’s plot.  Even if this does make the film seem odd at times, it ends up being a better Bond film than most Bond films.  Rebecca Ferguson steals the show as the film’s Bond girl, Ilsa Faust.  She brings so much charisma and energy to the performance that she easily makes herself an equal to Tom Cruise, and director Christopher McQuarrie and cinematographer Robert Elswit shoot her like a goddess.  The film even gets through its bond-esque, convoluted mystery plot much better than most Bond films would.
While the film ultimately feels a bit long, it’s hard not to admire the fact that everyone seems to be trying hard in the making of this film.  The cast (led by the consistent Tom Cruise) and the crew (Elswit does some fantastic work shooting this film, and the stunt crew deserves much credit for a film that is action packed but is also able to maintain its old school style) make this a film that is much better than its individual parts.

Mission: Impossible – Rogue Nation is one of the better films of the summer.
8/10
at August 04, 2015
Email ThisBlogThis!Share to TwitterShare to FacebookShare to Pinterest
Labels: 2015 films