Behind the Candelabra Review 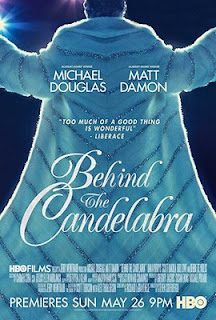 For a movie that might be one of the most buzzed about TV movies of all time (considering months of positive buzz and a highly publicized in-competition Cannes debut), Behind the Candelabra is surprisingly a lot of style over little substance.  Yet the movie still works.  It’s an incredible display of directing and acting, but with such a hollow script, Behind the Candelabra can never reach greatness.

Behind the Candelabra follows the love affair between Liberace (played by Michael Douglas) and Scott Thorson (played by Matt Damon), and the relationship’s aftermath including a messy legal situation and a major health problem.  The film is directed by Steven Soderbergh (in what he is billing as his last film) and is written by Richard LaGravenese (an Oscar nominee for The Fisher King).

This is quite a weird project for Steven Soderbergh to choose as his last film.  First of all, it’s a TV movie.  I know Soderbergh claims that the film was too “gay” for it to find major distribution, but the only thing that’s in this TV movie that hasn’t been seen in a major film before is a 5 second (or so) explicit sex scene that offered nothing other than making the actors’ performances seem more brave.  So I wouldn’t be surprised to learn that Soderbergh’s interest in working in TV had more to do with it than distribution problems.  Second of all, this film’s script is not good.  The entire script tries to survive on the thinking that a gay relationship is enough to make the film seem new and risky, which is completely untrue.  There is no deeper meaning that this script is going after and the second-half of the movie devolves into a bunch of arguing matches between Liberace and Scott.  Then again Soderbergh’s career has always been weird as he tries to find every opportunity to go against the current.

The format and script also allows his directing to take center stage, which only reinforces him as a talented individual.  Soderbergh is able to make his actors work at the top of their game and keeps the film going at a brisk pace (despite most of it being composed of repetitive arguments and interactions).  He also brings a lot of visual flair to a story you would be surprised to see any in.

While supporting players like Dan Aykroyd (probably the worst of the supporting turns by process of elimination), Rob Lowe (a performance greatly helped by a lot of silly makeup and an interesting hairstyle), Debbie Reynolds (great in maybe two scenes of screen-time) and Scott Bakula (almost unrecognizable) don’t get enough screen-time to make an impression, Michael Douglas and Matt Damon are stunning in this film.  Damon is surprisingly adept at being able to bring a lot of youthful energy to his performance and (until the film finds an emotional center around Douglas’ Liberace in the final act) proves to be the highlight of the film for most of its duration.  Meanwhile, Michael Douglas delivers one of the best performances of his career.  He never allows his impersonation to delve into caricature and brings some real humanity to the performance.  However, it is in the final minutes of the film that Douglas brings his performance to the next level.  One of his final scenes is what Oscars are made of as he delivers one final speech that is easily one of the best-acted scenes of the year on any medium.

Behind the Candelabra doesn’t bring TV movies to a new level but it is a solid film that allows directing and acting to take the front stage.

8/10
at May 28, 2013
Email ThisBlogThis!Share to TwitterShare to FacebookShare to Pinterest
Labels: 2013 tv