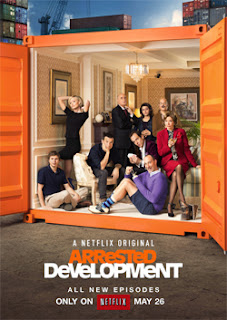 After seven long years, Arrested Developmenthas returned in what might be one of the most anticipated television events in history.  Therein lies a problem though.  With so much anticipation people seem to be forgetting that this series (while always one of the best on television during its initial run) was never perfect.  So while this new incarnation has its problems, Arrested Development is still as good as ever.  The new way in which the show decided to harness its ambition (this season follows a Rashomon-styled storyline) may create problems but also allows new avenues for Arrested Development to bring enjoyment.

Arrested Development follows the continuing adventures of the Bluth family.  Season 4 centers around the events that transpire after Lucille Bluth (Jessica Walter)’s maritime arrest and leads up to a Cinco de Cuatro (a holiday Lucille made up in protest of the Mexicans getting their own holiday) celebration that goes haywire.  Mitchell Hurwitz returned as showrunner and also directed all of the episodes along with Troy Miller (acclaimed TV comedy director).

Let’s begin by saying that the Rashomon plotline works for the most part.  It was an ingenious idea by Mitchell Hurwitz and company to use the format as a way to inject freshness into the show.  However, the format does bring its own set of problems.  The early episodes (such as “Flight of the Phoenix”, “Indian Takers” and “Double Crossers”) tend to have major pacing problems as there is just way too much exposition and far too few jokes.  It also creates a bit of disappointment when the season finale, “Blockheads”, doesn’t wrap everything up.  Some of that has to do with the fact that this season was purposely left open-ended for the possibility of another season (which the finale seems to be hinting at) or the long discussed movie but it also has to do with Hurwitz and company not wrapping up all of the arcs in a perfect crescendo.  That being said the format also allows for some of the best episodes in the series’ run (such as “Colony Collapse” and “Senoritis”) as timelines criss-cross at an unbelievable rate and the jokes zip by just as fast.  The format also should allow for even more fun on repeat viewings as there is just so much going on you won’t be able to catch everything in one viewing.

The cast is just as good as it once was but the change in format (from an ensemble comedy to a single character-centric comedy) makes some of the home run hitters a bit annoying while making some of the more annoying characters the home run hitters.  For example, there were a few times in the first three seasons where David Cross as Tobias suffered in comparison to the rest of the cast but as the star of two episodes in this season he is able to use his comedic tools to masterful effect.  Yet Portia de Rossi proved to be one of the better ensemble pieces in the first three seasons while she seemed to suffer in season four without enough people to play off of in her episodes.  Then again some of the home run hitters remained home run hitters no matter what format was used.  Will Arnett is the best example of this as he continued to make GOB the scene-stealer of the entire series.

While this is probably the weakest season of Arrested Development’s run, season four is still able to capture the magic of previous seasons.