85th Academy Awards: The Good, the Bad, and the Ugly 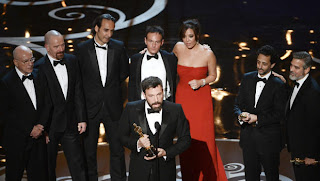 And another Oscars ceremony is in the books.  I ended up doing pretty well with predicting the Oscars this year (20 for 24).  The ceremony itself was enjoyable.  The winners were decent (although there were very few cases where the best in the category won) although never bad, and Seth MacFarlane was a subpar host.  So without further ado, let's get into some specifics:

THE GOOD
-Argo is a very fine winner.  It’s the best winner since The Hurt Locker, and it’s a film from a clearly talented filmmaker.  It was also great to see this film only win 3 awards when Oscars way too often likes to give sweep-like nights to its Best Picture winners.
-Speaking of Argo only winning 3 awards, it was great to see the Academy spread the wealth.  Out of the 9 Best Picture nominees, only Beasts of the Southern Wild didn’t come home with an award.  I was especially happy to see Zero Dark Thirty deservedly win for Best Sound Editing.
-It was also great to see quite a few Oscar “rules” go out the window.  Christoph Waltz won without a SAG nomination.  Argo won without a Best Director nomination.  We even had a tie in Best Sound Editing.
-It was probably one of the biggest locks of the night, but it was still great to see Adele win for one of the best original songs in recent memory, “Skyfall”.
-There were also a lot of great acceptance speeches.  Chris Terrio gave a heartfelt speech.  Anne Hathaway, who has been having trouble giving a good speech the entire season, finally pulled one off.  Jennifer Lawrence gave a typically charming speech.  Daniel Day-Lewis gave a speech worthy of his historic win, and Ben Affleck gave a speech that was just as energetic as the last time he won an Oscar.
THE BAD
-Craig Zadan and Neil Meron were failures in their producing capacity.  Their strategy seemed to be to throw everything at the wall and hope that something sticks.  While there were quite a few segments that were entertaining (the James Bond tribute and the musical tribute to name a few), nothing seemed to mix together (especially their musical-centric presentation with Seth MacFarlane’s shock comedy style).
THE UGLY
-I think people get a little too harsh with claims that the Oscars are too prestigious for certain types of jokes, but that disgusting “I Saw You Boobs” song had no business being in this ceremony.
-Also, I don’t want politics mixed into the Oscars when it doesn’t have to be.  Having Michelle Obama present Best Picture just seemed ridiculous especially in an awards season where the government’s involvement in film has already been questioned twice (Bill Clinton showing up at the Golden Globes as a Lincoln campaign tool and the senators demanding Zero Dark Thirty be edited).
at February 25, 2013
Email ThisBlogThis!Share to TwitterShare to FacebookShare to Pinterest
Labels: 85th Academy Awards