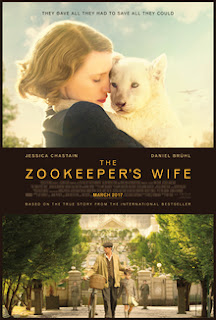 Hollywood has never been afraid of making a film about the Holocaust.  It’s really gotten to the point that the “innovative” Holocaust films (I’m looking at you Son of Saul) really aren’t that innovative.  So it was nice to see a film like The Zookeeper’s Wife take such a standard approach to the material.  The film isn’t great, but it ends up bring a nice showcase for Jessica Chastain and the rest of the formidable actors in the cast.
The Zookeeper’s Wife tells the real life tale of the Zabinskis, zookeepers for the Warsaw zoo who saved hundreds of Jews during the Holocaust, through the eyes of the determined and kind Antonina Zabinska (portrayed by Jessica Chastain in the film).  The film goes just about how you would expect it to.  It has all the usual suspects of this type of film, but director Niki Caro puts just enough cinematic magic on display to distract you from an otherwise boring story.  The best example of this is the film’s use of animals.  In a lesser film, the animals would have been used as just a spice to add into the film.  Here, though, Caro makes the animals feel integral to the plot.  It’s also surprising to see how the animals are portrayed in the film.  They are put into such dangerous situations and, yet, they always feel so life like on the screen (I’m assuming no animals were actually harmed during the course of this film).
The true strength of this film, however, is the incredible cast that it has assembled.  Jessica Chastain is playing the graceful female lead that she has been cast for so often, but it is because she is so great at it.  She just has a way of combining sweet quietness with a realistic sense of determination into a powerful concoction.  The other major standout of this film is Shira Haas as a young Jewish girl caught in the mess going on in this film.  She conveys so much emotion without the use of words that it’s hard not to see this girl having a future in acting if she chooses to continue this career.  Meanwhile, Johan Heldenbergh, Daniel Bruhl and Michael McElhatton (who is especially interesting in an against type role) are all quite good too.

The Zookeeper’s Wife is a conventional but well acted cinematic depiction of the Holocaust.
8/10
at May 16, 2017
Email ThisBlogThis!Share to TwitterShare to FacebookShare to Pinterest
Labels: 2017 films