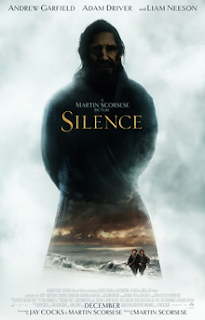 It seems like nowadays every single theatrical release of a Martin Scorsese film is a major event.  The man has pretty much become cinema’s high priest (considering his directorial talent in addition to the massive work he has done in promoting and preserving film).  Now Scorsese’s latest film didn’t make that much at the box office, but Silencecertainly has fans of film talking and has to be one of the most memorable experiences at a theater currently out there.  Silence is a brutal yet beautiful film on what it really means to be a religious person.  As such it is one of the best portrayals of religion put onscreen.
Silence follows two Jesuit priests (Andrew Garfield and Adam Driver, the later in a much more supporting role) in the 17th century as they travel to Japan to find their mentor (Liam Neeson) after a letter comes to them claiming that he has renounced his faith.
At a near three hours, Silence has a whopping runtime, and it can feel a bit repetitive at times.  The film mostly follows Father Rodrigues (Garfield) as he tries and fails over and over again to save Japanese Christians from persecution.  However, thanks to some beautiful direction on Scorsese’s part and career best work from Garfield, the film feels like something much more substantial than it actually is in the early goings.  It’s like a dark adventure film unlike anything we’ve ever seen.
However, it is the final act that is the true highlight of this film.  This is an epic film, but it is here that Scorsese delivers some of the most personal work that he has ever done.  It really takes his personal approach (not the committee approach that Christian films take way too often to awful results) to deliver a powerful vision of one man’s struggle with faith.  Scorsese is able to capture the reality of religion in a way that hasn’t really been done outside of Terrence Malick’s The Tree of Life.  It’s a realistic approach to such a vague concept as God while still finding ways to fit in religious elements naturally. Not only is this act thematically interesting, it also delivers some of the best visuals Scorsese has ever put onscreen.  It also helps you get Liam Neeson showing up briefly for what is his best work since the underrated The Grey.

If you can get past the brutality of the early goings of Silence you will be rewarded with a beautiful cinematic experience and a powerful third act that once again proves Martin Scorsese as one of the best filmmakers alive today.
8/10
at January 29, 2017
Email ThisBlogThis!Share to TwitterShare to FacebookShare to Pinterest
Labels: 2016 films