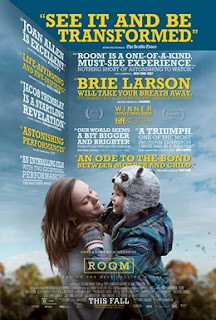 Films with dark subject matters are really difficult to make.  You have to find the right balance of tackling the material correctly and thoroughly while making sure you still have some sort of hope or happiness (or some other pleasing aesthetic) for the audience to latch onto.  Abduction is certainly a dark subject matter, and Room goes through this subject matter thoroughly.  Yet I found myself enjoying Roomunlike many of its brethren thanks to a strong cast, a Malick-ian touch, and a powerful life-affirming message at the center of the film.
Room follows Jack (Jacob Tremblay) as he celebrates his fifth birthday in the only home he knows, “room”.  Jack and his mother (Brie Larson) have lived there his entire life with occasional visits from Old Nick (Sean Bridgers), who provides them with the materials to survive.  Jack’s mother thinks now is the time to have Jack help her plan their escape into the real world that Old Nick has held them captive from.
It’s quite amazing how much director Lenny Abrahamson and writer Emma Donoghue do with this film considering their general lack of experience with Hollywood filmmaking.  Everything from the pacing to the world building to the effort they get from the actors is amazing.  While this is certainly not an action film, Abrahamson does well enough with the major set pieces of the film to install a real sense of intensity into the film.  Additionally, the world that the film builds is really fascinating.  It consonantly reminded me of the exchange about magic in the world and whales between Mason and his father in Boyhood in that the film is constantly able to build a fantasy world out of mundane things that people come across in the world everyday.  The way Abrahamson weaves this altogether makes it clear that he is an admirer of Terrence Malick as the film does seem like its trying to homage The Tree of Life although never at the disservice of its own storyline.
The cast is also really strong as even small performances such as those of William H. Macy (a multi-dimensional cameo appearance), Sean Bridgers (as the film’s creepy villain) and Tom McCarmus (in a heart-warming portrayal of a step-grandfather) make a lasting impression.  While Joan Allen and Jacob Tremblay do solid work in major roles, this film really belongs to Brie Larson as her heartbreaking but realistic performance brings so much dimension to this film.

Room is a powerful film that will hopefully jumpstart the Hollywood careers of many involved.
8/10
at December 12, 2015
Email ThisBlogThis!Share to TwitterShare to FacebookShare to Pinterest
Labels: 2015 films