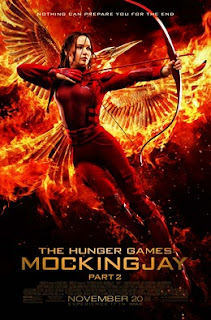 Fans and viewers of all ages have mostly derided the recent trend of breaking up a single book into two or more films.  They almost always say it causes a terrible first film that saves all of the great material for the later film(s).  I personally find the opposite to be true.  The breakup of a book usually allows the first film to be more experimental whereas the later film(s) end up being a predictable meandering to an even more predictable conclusion.  Just look at The Deathly Hallow films for this.  The first allows for David Yates to be at his best (showing he can really direct actors and have moments of inspiration such as with the animated short in the middle of the film) while the last is a predictable search for a bunch of boring Macguffins.  Even exceptions to this rule still prove the rule such as The Hobbit films where the films slowly falter as Peter Jackson gets more experimental the longer the trilogy goes.  Now we have another example in the form of The Hunger Games: Mockingjay – Part 2, which is a well made film that follows the book a little too closely to a terrible mess of an ending.
The Hunger Games: Mockingjay – Part 2picks up with Katniss (Jennifer Lawrence) recovering from her wounds from her attack by former lover Peeta (Josh Hutcherson).  Suffering both mentally and physically she must now accomplish the one mission she thinks she has left: kill President Snow (Donald Sutherland) and liberate the 13 Districts from his rule.  Unfortunately, the plot of this film follows the plot of the book a little too religiously.  The last half of Mockingjay, by acclaimed author Suzanne Collins, brings a bunch of interesting concepts up and then immediately drops them in favor of a clichéd ending.  It’s quite a mess so that’s what this film ends up being.  You have an incredible sense of bleakness that brings up some interesting points on politics and humanity only for all of this to be dropped out of nowhere so we get to the tired and clichéd romance.
Yet there are still parts of Mockingjay – Part 2that are incredibly well done.  For a film series that began with looking to some much needed directorial innovation for any sense of world building it is stunning to see how much work is put into the creation of Panem in this film.  The production design is astounding, the action scenes very cinematic, and the score (by James Newton Howard) one of the best of the year.  The film also proves that it has the characters of the series casted almost perfectly.  Lead star Jennifer Lawrence has always been one of the best actresses for subtle acting through facial expressions, and this film (and the previous films in the series to be honest) makes immense use of that.  Even smaller roles make an impact in this film whether it’s Gwendoline Christie in a cameo appearance as a military leader or Philip Seymour Hoffman’s silent and final performance as Plutarch Heavensbee.  Even series weak link Josh Hutcherson finally find some comfort in the range that he is forced to act in with his PTSD suffering Peeta.

The Hunger Games: Mockingjay – Part 2follows its source material to a disappointing ending.
5/10
at November 20, 2015
Email ThisBlogThis!Share to TwitterShare to FacebookShare to Pinterest
Labels: 2015 films