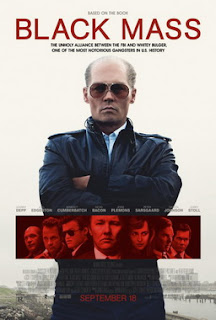 Every once in a while we get films that have so much recognizable talent onscreen that you just have to admire the whole thing.  Some people may not enjoy these films as the massive amount of recognizable faces takes away from the realism of the story, but when you have such a large cast with stars and talented character actors you know that the film will be in good hands.  We haven’t truly gotten one of these ensemble pictures since 2012 when we got the trio of Argo, Lincoln and Zero Dark Thirty, so it’s been a while.  Therefore, it’s quite a sight to see the cast of Black Mass onscreen together.  This is one of the most impressive casts brought together in a long time with unrecognizable A-listers (Johnny Depp) and character actors making the most out of slightly underwritten roles (Corey Stoll, David Harbour and Julianne Nicholson just to name a few).  Yet Black Mass can’t completely be called a satisfying film as it suffers from a lack of direction in its narrative.  It’s hard to really ever understand what we are supposed to take away from the plot or even which character’s story this truly is.
Black Mass follows the rise and fall of Whitey Bulger (Johnny Depp) and his gang as well as John Connolly (Joel Edgerton), the ambitious FBI agent who helps Bulger’s gang take on the mob.  Which character this film actually belongs to is another matter entirely.  While Edgerton’s Connolly has the main arc of the film, he disappears for long stretches of the film.  The same can be said for Bulger who doesn’t have as much of an arc but is the character the film ultimately begins with and ends with.  It’s this lack of focus that causes some big problems for the film.  It feels disjointed without a true anchor at the center of the film in terms of character.  Without one, the film ultimately never figures out what it wants to be.  I give credit to Scott Cooper and screenwriters Jez Butterworth and Mark Mallouk for trying to find a new take on a tired story but they ultimately come short of their goal.
The film is able to survive, though, thanks to its impressive cast.  Edgerton puts in some impressive work in a role that ultimately feels like Jeremy Renner was born to play.  Corey Stoll (as a determined FBI chief), Peter Sarsgaard (as a conniving gambler), David Harbour (as a friend of Connolly’s) and Julianne Nicholson (as Connolly’s wife) all do impressive work in short roles.  It also gets to the point that you forget Johnny Depp is even in this film as he completely disappears under the makeup and Boston accent to create a Whitey Bulger that feels like his most complete character in a while.

While Black Mass’ storyline falters, the cast’s impressive set of performances more than makes up for it.
7/10
at October 02, 2015
Email ThisBlogThis!Share to TwitterShare to FacebookShare to Pinterest
Labels: 2015 films