Me and Earl and the Dying Girl Review 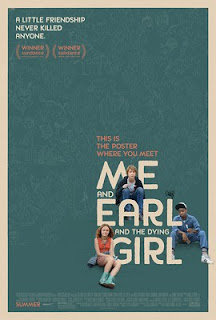 At first glance, Me and Earl and the Dying Girlis your typical independent romantic drama that tries to find its own sense of quirkiness and ride that to success.  However, as the main character is keen to remind us, “This is not a love story”.  Me and Earl and the Dying Girl finds ways to keep you off-guard despite reminding you a lot of its other Sundance brethren.  Not all of it works for the best, but this film is ultimately one of the most unique experiences you will have in a theater this year.
Me and Earl and the Dying Girl follows Greg Gaines (Thomas Mann), a high school senior with no ambitions outside of continuing to make spoof films with his “co-worker” Earl (Ronald Cyler II).  His life begins to change, though, when his mother (Connie Britton in an underwritten role) forces him to hang out with fellow high schooler Rachel (Olivia Cooke with a phenomenal performance) after she is diagnosed with leukemia.
The story of this film is highly predictable to the point that screenwriter and author Jesse Andrews believes an unreliable narrator is necessary.  However, the film more than makes up for this with its sense of quirk.  The over use of pop culture references, Claymation imagination sequences being forced on you without notice, the odd and obscure film references all make for an experience that is a lot to grasp onto at first blush.  It takes a while for you to get used to this film’s sense of style, and it will prevent a lot of people from getting into this film, but once and if you do, you are given quite a unique experience.  Jesse Andrews and director Alfonso Gomez-Rejon also do an admirable job of mixing in some honest drama with all of this quirkiness and neither really detracts from the other.
It also helps that the three leads are well cast.  Thomas Mann is able to carry this odd film quite well, and Ronald Cyler II does a lot in what is ultimately a one-note role on paper.  However, this film really belongs to Olivia Cooke, who oddly once again finds herself cast as a teenager with a terminal illness (she also happens to play one on Bates Motel).  It’s hard not to fall in love with Rachel thanks to Cooke’s performance, and the length she goes to in both range and in physical transformation is incredible.

Me and Earl and the Dying Girl is an odd film that also has quite the emotional wallop in store for its viewers.
7/10
at July 10, 2015
Email ThisBlogThis!Share to TwitterShare to FacebookShare to Pinterest
Labels: 2015 films