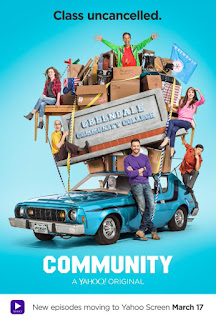 For a few seasons now people have wondered whether Communityand showrunner Dan Harmon’s #SixSeasonsAndAMovie campaign would wear on the show’s creative freedom.  Did Community really have enough material to cover six seasons a movie?  Until now the answer has been yes.  However, season six is finally the point in which this show seems to be straining.  There are still some great moments in what is presumably the final season of this wacky show (this show has always known how to do a wicked paintball episode or a fulfilling finale), but the paper thin cast and too much repetition of jokes are a major grind on this season.

Season six of Community picks up with the study group having been transformed into an improvement group for Greendale.  When Annie (Alison Brie) accidentally forgets a major task, the group is forced to call in help from a safety consultant (Paget Brewster), which unsettles the balance of the study group.

With Yvette Nicole Brown unexpectedly leaving before the beginning of this season, the mass exodus of cast members in recent seasons was certainly felt this season.  With only six original cast members left, bit players like Dean Pelton (Jim Rash) are allowed to shine in even further expanded roles and problem characters like Chang (Ken Jeong) are finally given some decent material.  However, the ensemble chemistry that made this show so delightful in earlier seasons seems to be non-existent now.  Worsening matters are the additions of Paget Brewster and Keith David as replacement study group members.  Paget Brewster is pretty much playing a party pooper, but the show unfortunately isn’t aware that she is as much of a buzz kill to the viewers as she is to the characters.  Meanwhile, Keith David brings nothing in what should have been another zany character added to an ensemble filled with them.

The show does have its moments, and that’s especially the case in the final few episodes where “Modern Espionage” (a paintball episode that spoofs Captain America: The Winter Soldier to great effect) and “Emotional Consequences of Broadcast Television” (a great series finale if it happens to be the case that features strong performances from Joel McHale and Alison Brie) emerge as highlights.  However, too often this season the show feels like it’s still trying to find a rhythm, and that should not be happening in what might end up being the final season of a show.

Season six of Community makes you slightly question whether #SixSeasonsAndAMovie is all worth it.

7/10
at June 06, 2015
Email ThisBlogThis!Share to TwitterShare to FacebookShare to Pinterest
Labels: 2015 tv