Far From the Madding Crowd Review 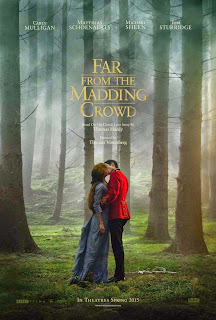 The summer movie season tends to feature a ton of CGI action films and star-driven comedies, but the season surprisingly does have a lot of room for counter programming from the independent section of cinema.  The indies are off to a great start this summer as Far From the Madding Crowd is the kind of quiet but well-made counter programming that this season needs more of.  With a fantastic cast led by the incredible Carey Mulligan, beautiful imagery and a stunning score, Far From the Madding Crowd is able to overcome some of the problems with its melodramatic storyline.
Far From the Madding Crowd, based off the book by Thomas Hardy, follows Bathesheba Everdene (Carey Mulligan) during the 1800s in England as she tries to keep her farm afloat while being courted by a farmer (Matthias Shoenaerts), a soldier (Tom Sturridge) and a wealthy landowner (Michael Sheen).
With so many characters being involved in a romantic drama such as this the storyline tends to get a little overly melodramatic, especially when another female character (played well by Juno Temple but without enough screen time to make a true impression) is added into the plotline.  This probably could have been handled with a much louder approach than the subtle approach that director Thomas Vinterberg (whose The Hunt is definitely one of the best foreign language films in recent memory) takes to telling the story.  The problem with that is Vinterberg’s subtle approach does so many wonders with the other sections of the film.
It’s a catch-22 situation that never allows this film to rise to true greatness, but fortunately everything else in the film is working quite well.  The imagery that Vinterberg and his cinematographer Charlotte Bruus Christensen are able to conjure up is incredible.  The England they put onscreen can feel magical while still feeling in line with the subtle approach of the film.  It also helps that the score accompanying this imagery is so well done.  Craig Armstrong brings a moody score to the film that is quite effective in adding another layer to what is going on onscreen.  However, this film is nothing without the strong cast led by a career best performance from Carey Mulligan.  This might be the most intricate character Mulligan has played yet and Miss. Everdene allows her to use all of her abilities to great effect.

Far From the Madding Crowd is a strong start to the counter programming slate for the summer season.
8/10
at May 23, 2015
Email ThisBlogThis!Share to TwitterShare to FacebookShare to Pinterest
Labels: 2015 films