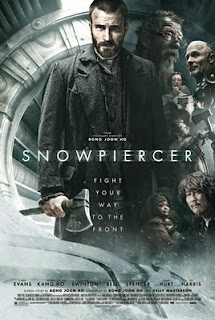 The environment has become a rather large political issue in recent years.  So it is no surprise to see numerous films and TV programs touch upon this subject.  One of this weekend’s film releases, Interstellar, even featured a plot that began with an environmental disaster even if that was just used as a springboard for other ideas and events.  It seems in this era of loud political partisanship that that is the way to go.  Just have an environmental issue be a springboard to other ideas, and that’s exactly what Snowpiercer did as well.  Snowpiercer comes across as an under polished film that becomes greater than its parts due to the questions it raises about humanity.
Snowpiercer takes place in a future where an environmental disaster has left Earth inhospitable.  The only remnants left of humanity live in a constantly in motion train known as the Snowpiercer.  Life on board the train is separated into a caste system based on what type of ticket a passenger purchased.  A desperate man in the poorest part of the train (Chris Evans) begins a plan to take control over the train and destroy the caste system forever.
Director Bong Joon-ho (making his English language directorial debut) puts a lot on his plate, and at many times this film gets to be overstuffed.  The film raises questions on capitalism, human nature, a leader’s duty to his constituents and many other matters that could have filled a storyline worth multiple films.  At the same time Bong Joon-ho must construct an effective and action-packed thriller to wrap all of these questions in.  This is what the film is least effective at.  The action isn’t exactly polished.  It feels like it comes from your typical superhero film, just without the stakes being as well placed as those films tend to be.
Despite these faults I couldn’t help but still be intrigued by this film.  All of it leads to a satisfying yet shocking conclusion that gives you interesting answers (even if not concrete) to some of the questions it raises that feels unlike an information dump even if it really is.  It also helps that the film has a sturdy center in Chris Evans’ performance.  Evans does as good of a job as anyone could with Captain America, but it doesn’t exactly stretch his acting capabilities.  This performance shows that Evans is quite a talented actor as he is able to show a darker and more emotional side that leads to a killer monologue about his past.

Snowpiercer is one of those few films that is able to become a great whole despite many weak parts.
7.5/10
at November 12, 2014
Email ThisBlogThis!Share to TwitterShare to FacebookShare to Pinterest
Labels: 2014 films