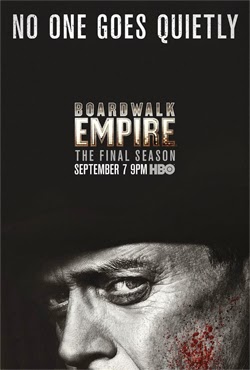 Boardwalk Empire has never been one of the great shows of our time.  It sure had great moments (there were plenty) and even great seasons (season three is a master class in constructing a period drama), but as a whole it didn’t amount to something completely great.  However, having just aired its series finale this past Sunday, it’s clear to me that Boardwalk Empire will be missed.  It has been a sturdy presence on television’s most competitive night, Sunday, and the show’s final season was another fine example of how reliably good this show has become after a disappointing first season.

The final season of Boardwalk Empire followed Nucky Thompson (Steve Buscemi) as he continues to expand his empire into Cuba while facing even more threats at home including turbulent times in his relationship with the Chicago crime empire led by Al Capone (Stephen Graham) and the threatening ambitions of Charles Luciano (Vincent Piazza).  Like most seasons of Boardwalk Empire, the final season starts off with a little bit more than it can chew resulting in a show that feels bloated without really going anywhere in the plot as the first few episodes are all setup.  Yet the pace of the plot undeniably quickens at a much faster rate than any season of this show before.

It’s when the pace of this season quickens and major actions are taken in the homestretch that the show finds itself in an interesting dilemma.  Since the show has always used major historical figures and tried to stay as historically accurate as possible, the show has to wrap up the plot of the fictional characters (which are most of the major ones) while also staying true to history.  You can feel this relationship straining a lot in the final half of the season, and the results are very mixed.  The closure of the Chicago arc works so well because the work of the actors behind the historical (Stephen Graham) and fictional (Michael Shannon and Shea Whigham) characters are so great that you believe that plotline no matter how wishy-washy it gets.  On the other hand the rise of Charles Luciano doesn’t work quite as well because Vincent Piazza doesn’t have the charisma or the performance that the fictional characters he’s defeating have.

However, I think most of the faults of this season are covered up by the show giving its main character, Nucky Thompson, the character arc and attention that he deserves for once.  This is the most Nucky centric season yet, and the show’s exploration of stained innocence and redemption through him are done incredibly well.  Steve Buscemi and Marc Pickering (as a younger Nucky) do exceptional work with the character this season.