My thoughts on the 66th Primetime Emmy Awards 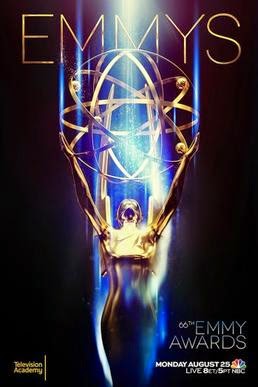 THE GOOD
-Breaking Bad triumphantly ended its run at the Emmys with 5 Emmys last night including 3 for its main trio of actors, another for Moira Walley-Beckett’s standout work on “Ozymandias” and, of course, the big one, Outstanding Drama Series.  All were richly deserved, and it was great to see the greatest performance of all-time, Bryan Cranston as Walter White, get the credit that it deserves.  Cranston is now tied at 4 with Dennis Franz for the most Emmy wins in the Outstanding Lead Actor in a Drama Series category, and he got that fourth one in what is arguably the most stacked category in Emmy history.
-If anyone deserved an Emmy last night, it was certainly Martin Freeman, who delivered not one, but two great performances during the 2013-2014 season.  With a victory for his performance on Sherlock, he is now an Emmy winner.  Martin Freeman has taken on an iconic role and made it his own, and that should be more than enough reason to win over Matt Bomer’s Emmy bait role that ended up being far last interesting than what fellow co-stars Jim Parsons, Taylor Kitsch and Joe Mantello did in The Normal Heart.
-I thought Seth Meyers was surprisingly good as host.  His opening monologue was funny and a lot of his banter throughout the ceremony worked.  Additionally, most of the non-Seth Meyers skits were entertaining (with the exception of Stephen Colbert’s imaginary friend bit).  The highlights were Billy Eichner’s on the streets of New York City video and “Weird” Al’s Game of Thrones song.
THE BAD
-It’s becoming clear that the format of the Emmys has to change.  There are just too many undeserving repeat winners (Modern Family, Jim Parsons, Ty Burrell, Jessica Lange etc.), and in most of those cases (Modern Family being the exception that I can think of) it was because they faced such weak competition.  Maybe it’s time to start combining all genres into one category?  It would allow more of the behind-the-scenes people to get a turn in the spotlight with less main categories, and many people already say that the current categories compare apples to oranges so you can’t worry about that excuse from people who would oppose such an idea.
THE UGLY
-There’s something seriously wrong with Glenn Weiss.  His work for the Tony Awards was solid so it wasn’t liked he deserved the award that he won while directing the Emmys.  However, there was no need to go on for almost 5 minutes (an exaggeration but it was one of the longer speeches of the night), and to play off Vince Gilligan with the Emmys still on track to finish ahead of schedule was not only a classless move but made his previous speech completely classless.

-My predictions were pitiful.  I went 9 for 26, which wouldn’t be so bad if there were a ton of upsets, but most of my wrong predictions were awarded to the frontrunner, co-frontrunner or the main challenger.
at August 26, 2014
Email ThisBlogThis!Share to TwitterShare to FacebookShare to Pinterest
Labels: 66th Primetime Emmys