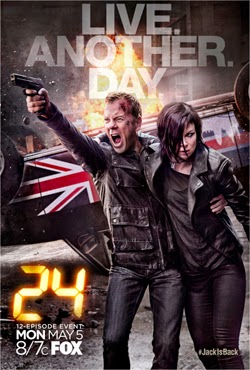 In a shocking announcement last spring, FOX announced it was bringing back the long running thriller 24 back to the air for a limited event series.  In theory this sounded great.  At the end of its run, 24 was clearly showing its age but it was/is a show that is easy to hold affection for.  A small event series would allow Howard Gordon and company to do something new with the format and bring the franchise to a better conclusion than it was left off at or set up a potential movie that has been stuck in development hell for sometime.  While 24: Live Another Day was a lot of fun and the perfect type of summer programming, this is not a franchise saving season.

24: Live Another Day picks up in London where President Heller (William Devane) is getting ready to sign a pact on drones with the British Prime Minister (the always charming Stephen Fry in a reoccurring role).  However, a new terrorist threat is emerging while CIA intelligence picks up signs of the return of one of their most wanted men, former CTU agent Jack Bauer (Kiefer Sutherland).  Most of the crew from the original series returns including showrunner Howard Gordon and main director Jon Cassar.

As a whole 24: Live Another Day is far from being one of 24’s best seasons.  It starts out great and the opening arc (which runs for a good nine episodes) is one of the show’s best.  However, the season is missing a signature 24 moment and it ends with a whimper as numerous plotting mistakes are made in the closing episodes.

While being relatively low-key for 24(there are still numerous action sequences and plot twists in every episode) the opening arc really allows an opportunity for the cast to shine as the sturdy Kiefer Sutherland leads a fantastic supporting cast.  William Devane, Yvonne Strahovski (the new female lead) and Michelle Fairley (one of the show’s best villains ever) all deliver memorable performances.

This is in theory great, but it made Howard Gordon and company realize they had to up the ante and what we are left with are a final three episodes that are completely worthless.  Villains that no once cared about are reintroduced while major but hardly memorable characters are killed off in order to create a big moment.  All of this fails and it only makes the already murky future of Jack Bauer even murkier.

24: Live Another Day is a bit of a disappointment but not enough of one to stop me from watching another future installment, if there ever is one.