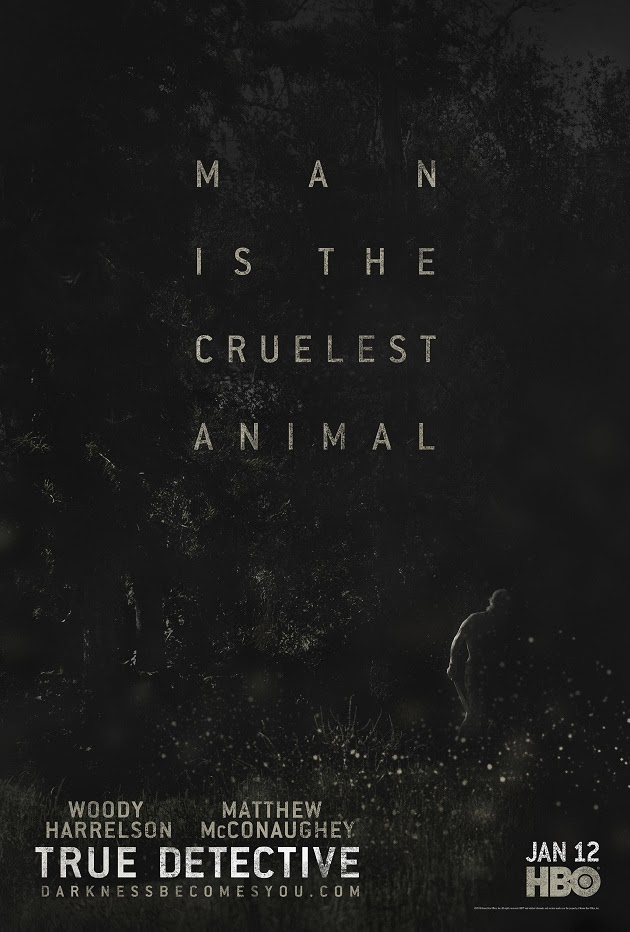 It’s been a while since television has gotten a hold on the anthology series, but with the success of FX’s American Horror Story we are finally seeing a revival of the format.  While American Horror Story may not be a shining example of the format it may have just given the confidence to HBO to greenlight a certain anthology series about detectives and written by a relative newcomer named Nic Pizzolatto.  True Detective is a fascinating experiment in how to make a television series but the story it tells within is just as fascinating.  With two incredible performances and some of the best directing the television format has ever seen, True Detective is one of the best programs in television this season.

True Detective follows Rust Cohle (Matthew McConaughey) and Marty Hart (Woody Harrelson) as they are being interviewed in 2012 about a murder case they worked as detectives in the Louisiana State Police Force in 1995.  The entire series is written by Nic Pizzolatto (whose most prolific work in television to this point was the much maligned, but maybe unfairly so, first season finale of The Killing) and is entirely directed by Cary Fukunaga (Sin Nombre and the Mia Wasikowska/Michael Fassbender Jane Eyre).

Darkness is a tough subject to cover in a visual format.  It can become too uncomfortable for viewers way too easily so it really takes some skilled directing and writing to guide us through that darkness.  Nic Pizzolatto and Cary Fukunaga do just that.  In the hands of Pizzolatto, the writing makes sure that the darkness is there with a purpose as it uncovers some interesting characteristics of human nature.  In the hands of Fukanaga, the directing makes sure that every single detail matters and that even the darkest moments can be beautiful (the 6-minute one-take in the middle of the Louisiana slums as all hell breaks loose will remain as one of the great scenes of television for a long time to come).  More interesting though is that this creative team found a way to take on the darkness of humanity in such a frank manner while still finding time to show the lightness in humanity in a way that avoided the cheese and felt right at home with everything that came before it in the series.

While the directing and writing of the show are highlights, the glue that keeps the series together is the performances from the show’s two leads.  Matthew McConaughey gives the performance of his career as Rust Cohle.  He’s instantly captivating (which let’s be honest is something he has struggled with his entire career) and really brings the performance home with a powerful final scene that reveals the true nature of this series.  Meanwhile, Woody Harrelson does wonders as a much needed straight man.  It was really nice to see him find a way to bring some comedic moments to a series that desperately needed them at times.  As for the supporting cast there are a few performances sprinkled within that are interesting (for instance, Glenn Fleshler as a long time native of the area) but the writing just doesn’t give them enough material to give a lasting impression.  That ends up being the one problem of the series as it shortchanges characters that probably deserved some more time (for instance, Marty’s daughter played by Madison Wolfe in early episodes and Erin Moriarty in later episodes).

Along with the final season of Breaking Bad, True Detective is making a case for 2013-2014 as being the best season of TV ever.

9/10
at March 10, 2014
Email ThisBlogThis!Share to TwitterShare to FacebookShare to Pinterest
Labels: 2014 tv