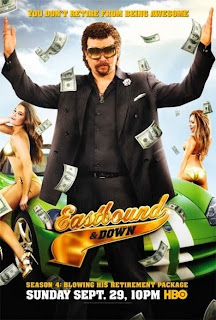 With Breaking Bad arguably having the greatest final season in television history, you would think it would be a lot tougher for shows in their final seasons to get any attention this TV season.  Add in a high-profile final season such as How I Met Your Mother’s, and there is almost no attention left to spare.  Yet Eastbound & Down has quietly had a fantastic final season (again after it was resurrected from the dead last year).  The show found loose ends where there seemingly was none and gave Kenny Powers his greatest character journey yet.

The final season of Eastbound & Downpicked up with Kenny Powers (Danny McBride) trying to find meaning in retirement.  However, his daily nine to five job isn’t cutting it for him.  When sports talk show host Guy Young (Ken Marino) offers Kenny a guest spot on his show, Kenny thinks that his return to fame is about to begin.  Ben Best, Jody Hill and Danny McBride continued to run the show while the season was directed by Jody Hill and David Gordon Green (Pineapple Express).

Eastbound & Down has always straddled the line between outrageously funny and outrageously uncomfortable, and I think that line got even thinner for the show’s final season.  There were definitely moments this season (especially early on) that were too uncomfortable and just crass in nature.  However, as the show finally figured out what direction they were going to take Kenny Powers, the series experienced what might be its best run of episodes in its entire run.  Beginning with an episode that focused on a family and friends vacation to a water park resort, the show finally decided to become a comedic version of Richard III (something a bit more sinister than the show has attempted before).  While many shows have attempted a similar storyline (Breaking Bad and House of Cards to name some recent big ones) none have attempted it in such a comedic fashion so it not only worked but also actually strengthened the show.

Danny McBride has never been better as Kenny Powers, and if it weren’t for the fact that this series is so under-seen, Kenny Powers would be an iconic character of television thanks to McBride’s work.  Kenny has never been as outrageous or as sympathetic as he was this season, and that is a tough mix to master for an actor.  McBride made it look easy.  It was also nice to see Katy Mixon as Kenny’s wife, April, and Steve Little as Kenny’s sidekick, Stevie, actually get real storylines for once.  Their characters have been used in service of Kenny in the past so it was a bit of fresh air to actually see Mixon and Little get material to work with for once.  Ken Marino was also quite good as the antagonist of the season.  Despite the series’ love of fitting in A-list star appearances, Marino ends up being one of the more memorable guest stars the show has had.

Eastbound & Down ends on a high note once again.

8.5/10
at November 19, 2013
Email ThisBlogThis!Share to TwitterShare to FacebookShare to Pinterest
Labels: 2013 tv